Founded in 2007 by Andre Farkas, Viaje's approach to cigars centers around a universally small-batch approach, focusing on limited-edition releases that reappear on a semi-regular basis. Strict production standards restrict both the quantity and availability of Viaje's cigars, but this style of manufacture allows for greater control over their blends and production styles. The Skull and Bones is one of Viaje's longest-running and most well-represented series, having around 50 different cigars comprising its selection since its original release in 2010. This ashtray commemorates the line of cigars handsomely, with the brand's logo emblazoned on the bowl while four skull-and-crossbones insignias mark the corners of the ashtray, flanking the four cigar divots that allow for easy smoking with friends. 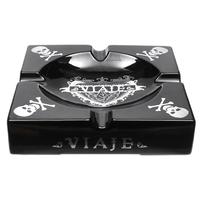 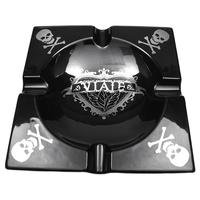