Rick Newcombe has collected here in 267 pages, all of his writings on pipes and tobaccos, covering articles previously printed in Reason, Pipes and tobaccos, Pipe Friendly, The Pipe Collector and The Pipe Smoker's Ephemeris, as well as new material never before published. Mr. Newcombe writes in a unaffected, unpretentious style that is a delight to read, and touches on many aspects of pipe smoking and collecting, from Pipe Shops In Europe to Breaking In A New Pipe.

This is the new Sixth Printing, including new photos, a new cover and some new content, plus sixteen pages of new color photographs by famous Los Angeles-based photographer Robert Gardner. When we wrote the above review in 2004, though we loved the book, we had no idea what a huge success Mr. Newcombe's book would become. By number of copies, it has sold far more than any other book we carry. 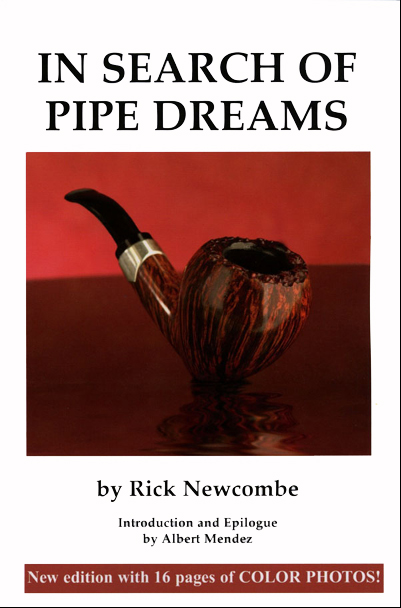 Customer Reviews (4 Total)
Write A Review
Write a review
Overall Rating:
4.50 out of 5 stars
Very Entertaining.
By: D.L.Ray
Product: Books In Search of Pipe Dreams - Rick Newcombe
I've never met the Author, but I feel as if I could pick him out of a room by his conversational mannerisms. His absolute enthusiasm for Pipes shines through each chapter. It is not a textbook of technical knowledge, so much as a homage to how Pipes ... Read More have touched his life. I enjoyed the insight he has on the subject as well as the stories he tells. A very enjoyable read for any fan of the Pipe. -Best Regards, Dave Ray Read Less
Good Read
By: ***Silent Owl Speaks***
Product: Books In Search of Pipe Dreams - Rick Newcombe
Throughly enjoyed the book and this is coming from someone that is not into pipe collecting, or knows anyone that is into pipe collecting. This is not just a book that is focused on this topic and forgets about everything else associated with pipe s... Read More moking. It covers the entire arena and is a very friendly, opinionated work that is not judgmental on any level. I also, enjoyed learning more about the high end pipe craftsman that are still very strong to this day. This book is a good beginning into that subject and one that I truly lean towards in this life. A nice easy read and one that I love recommend to any interested in pipes in general, thank you. Read Less
I thoroughly love this book.
By: Jeremy F.
Product: Books In Search of Pipe Dreams - Rick Newcombe
I am a fan of written works on my chosen obsession, and often read many online articles in a given week on the subject. This book has the dual quality of providing readings that I have seen before and offering them in a novel form while providing a s... Read More napshot in time of history that gives a clear picture of the pipe smoking world. The best thing about it, in my opinion, is that most of these writings and stories occurred right at the time, or slightly after, I started smoking pipes myself. I am enamored of the author's clear intention to identify his own opinions while at the same time providing contrasting views from others all the while maintaining the fervent love of pipe collecting itself. ~J Read Less
Fun and Informative Reading
By: Bill M.
Product: Books In Search of Pipe Dreams - Rick Newcombe
Nice writing style. Reminds me a bit of Rick Hacker. I was happy to find mention of a pal of mine in one of the chapters. Worth the money.