"Bo Nordh was one of the most talented and skillful pipe makers of our time. His reputation steadily grew and was at its high point, when he suddenly died in 2006. Most of his pipes are now among prominent collectors in Japan, USA, Germany, and several other countries."

Illustrated with 125 photos (the overwhelming majority of which are full color) this remarkable edition details Bo Nordh's life, his character, and, of course, his art, from the life-altering motorcycle accident which led him towards discovering an innate passion for shaping briar, to his his sudden death in 2006. Many details of the late master artisan's process and philosophy of pipe making are revealed therein. 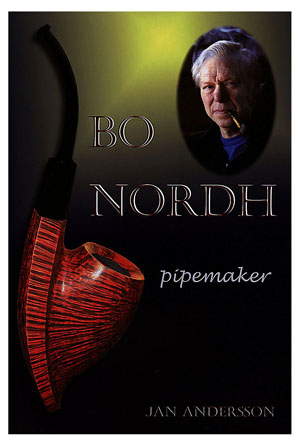 Customer Reviews (1 Total)
Write A Review
Write a review
Overall Rating:
5.00 out of 5 stars
What can one say about the illustrated description of a life
By: Jeremy F.
Product: Books Bo Nordh - Pipemaker
This was a rather emotional journey full of facts and stories. Bo had a good and full life. The pictures of the pipes are magnificent. We should all be so lucky to have fans and friends remember us in such a way. ~J