There are few things that quite warm a man on a cold winter night like a little humor - and "About Smoke" is loaded with it. Granted, much of that humor is unintentional, the result of an early 21st century man reading the leisured musings of an anonymous, early 20th century Dunhill customer. (Don't let your wife read the "Ladies' Pipe" section if you know what's good for you.)

Of course, for the more scholarly-minded, there's a wealth of insight to be gleaned regarding early 20th century pipes, pipe smoking, and accessories in their contemporaneous perspective from both "About Smoke", and the included 1914 booklet "Things the Soldiers are Asking For!". 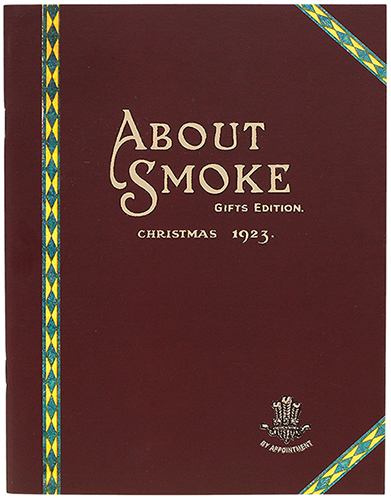 Customer Reviews (2 Total)
Write A Review
Write a review
Overall Rating:
4.75 out of 5 stars
Interesting from a historical advertisement perspective
By: Jeremy F.
Product: Books About Smoke...A Christmastime Companion Set
The witticism in the pamphlet was very interesting from a long view of comedy of the past. I'll be sure to warn my roommate about the 'women's section' should she wish to read it. A very interesting stroll into targeted advertisement for pipes from t... Read More he 20s. ~J Read Less
Nostalgic
By: cdsmitty
Product: Books About Smoke...A Christmastime Companion Set
Great books, funny, and interesting. I like getting them out around the holidays for a quick read.