This special pipe lighter from Zippo features holes on the sides of the metal flame casing, allowing fire to be drawn directly into the pipe chamber from the side without charring the rim. The Zippo pipe lighter is specifically designed to meet the unique needs of pipe smokers. It's available in a wide range of styles and finishes, this version wearing a black leather-esque design with a discrete pipe logo. 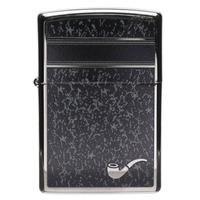 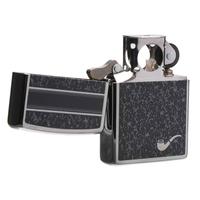 Customer Reviews (2 Total)
Write A Review
Write a review
Overall Rating:
5.00 out of 5 stars
Super handy outdoors
By: Markutio
Product: Lighters Zippo Designer Pipe Logo Pipe Lighter
It takes short, sharp, powerful puffs to get the flame down into the bowl. Managing to not overheat the pack while getting it lit and minimizing the taste of lighter fluid takes a little technique and getting used to. It is well worth mastering for t... Read More hose windy days or when you're out drinking and don't want to drop your expensive lighter, etc. Read Less
My Collection
By: Egrubbs
Product: Lighters Zippo Designer Pipe Logo Pipe Lighter
This was #1. Love it!