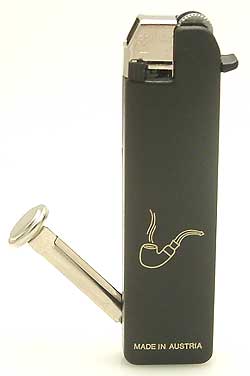 Customer Reviews (4 Total)
Write A Review
Write a review
Overall Rating:
3.63 out of 5 stars
Great for the price.
By: fletch63
Product: Lighters Bentley Lighter w/ Tamper (Black)
I like these lighters, as I have had $100 lighters that stank this little cheap lighter out performs them all , I have 5 or 6 of them laying around and never have problems, I am partial to wooden matches though.
Meh
By: Nick T.
Product: Lighters Bentley Lighter w/ Tamper (Black)
Do not expect this thing to light outside on even a mildly windy day. The backup tamper is nice to have, but has the propensity to fold mid-use. I'd personally rather have a fuel gauge than an extra tamper, but you can't ask for everything out of a f... Read More ive buck lighter. Read Less
Better than expected
By: Moonshade
Product: Lighters Bentley Lighter w/ Tamper (Black)
Well, this little lighter is better than I expected it to be. It puts out a nice flame, the angle of the outlet is good, it is pretty decent on fuel usage even on high & the tamper is a nice feature. The fact that you can actually change the flin... Read More t is awesome. It is definately well worth getting. The only reasons I did not give it a 5 are: Inconsistancy with lighting. It will light, eventually. Have this problem in cool or warm temps & with it full or partially empty. The flint holder is plastic & feels a bit flimsy as is the top. Sometimes when lighting if there is a breeze you have to make sure the flame doesn't blow back & melt it. All in all it is a very good product & well worth buying. Read Less
Good Lighter!
By: David Peters
Product: Lighters Bentley Lighter w/ Tamper (Black)
This lighter isn't much to look at but it works great. It's both reliable and economical with fuel, and its little tamper works fine too.