A stouter take on the familiar Artist/Classic tamper series design, 8deco might call these the "Buddha Belly", but to my eye they resemble an Art Deco rocket ship more than anything. Like the aforementioned series, they feature a vented foot, a threaded nose-cone that reveals a dottle-pick, and are made available with a variety of colorful fuselages. 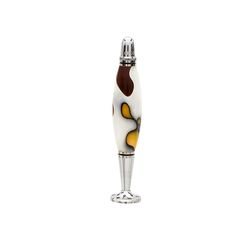 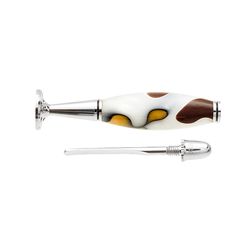 Customer Reviews (1 Total)
Write A Review
Write a review
Overall Rating:
0.50 out of 5 stars
Fell Apart
By: Holly A.
Product: Pipe Tools & Supplies 8deco Buddha Belly Tamper Brown and Yellow Swirl
The item's bullethead part fell apart after less than a year (7 months) of light usage but here's the trick to a friction connection which is how the pick/dottle is connected to the bullethead. Take a pair of pliers and squeeze the tube piece around ... Read More the pick part. If you're up to it you can tin solder them together or just order the right length for the pipe so the tube connection is not exposed to heat when poking into deep bowls like Nordings. These are really interesting looking and resemble lava lamps. These Buddha ones are about 3 inches and the pick is about 1.3 inches. The classics are longer. Read Less