Pewter is a classic material; first introduced during the Bronze Age (unsurprising, given that two of its major components - tin and copper - are shared with bronze), it saw common and widespread use in Europe from the Middle Ages until it was superseded by glass, silver, and porcelain beginning in the 18th century.

Despite falling out of use in common objects, its dark metallic luster and reassuring, solid weight has kept it popular for use in decorative objects, such as Peterson's Sherlock Holmes tamper. It's difficult to think of a better material to accentuate the confidence and resolution seen in Peterson's depiction of one of the world's most famous, albeit fictional, investigative minds. 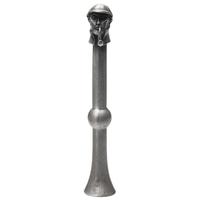 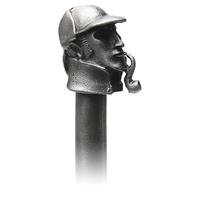 Customer Reviews (4 Total)
Write A Review
Write a review
Overall Rating:
4.88 out of 5 stars
Nice tamper
By: Smokey
Product: Tampers & Tools Peterson Sherlock Holmes Pewter Tamper
Good heft, good finish, excellent craftsmanship, comes in it’s own little Peterson cloth bag. An excellent holiday gift for any pipe smoker. Came free with my latest Peterson pipe but worth the listed price in my opinion.
Awesome, goes great with Sherlock pipe!
By: georgeb
Product: Tampers & Tools Peterson Sherlock Holmes Pewter Tamper
The details on this are great, in person it is better than the pic on the website. One piece, solid, extremely pleased with this item!
A Curiosity Worth Purchasing
By: Puffin’ Pied Piper
Product: Tampers & Tools Peterson Sherlock Holmes Pewter Tamper
As a boy I loved reading Sir Arthur Conan Doyle but I found as a pipesmoking adult, it grated on my ears when someone called me Sherlock while I puffed Calabashes, or even non-Calabash bent pipes. I suppose this was one reason I veered away from Pete... Read More rson’s Sherlock line of pipes, especially with their accompanying inscriptions. But this tamper? I had to buy it. First, it’s pewter. Not much pewter items fashioned out there these days. And I was raised in a home with some British pewter antiques in the dining room. Secondly, the face has a gothic feel to it, especially it’s profile view, and the fact that he’s puffing a pipe and sporting his famed cap? The sale was “closed”. And no regrets with this purchase and its low price—despite there being no internal dottle pick. Read Less
Not bad at all
By: David J.
Product: Tampers & Tools Peterson Sherlock Holmes Pewter Tamper
Nice weight. I wish it had a dottle pick but not a biggie. Nice detail. It does bring a bit of old world charm....