Released in April 2022 as LCA's monthly drop, the Plata o Plomo Tiffany Limited Edition cigar was made by Sinistro for LCA. Translating to "silver or lead" in Spanish, Plata o Plomo references a trademark phrase used by Colombian kingpin Pablo Escobar when trying to bribe officials: Accept the money (silver) or get a bullet (lead). The first Plata o Plomo cigar was released through LCA back in 2020, and it featured a Connecticut Shade wrapper, undisclosed binder, and fillers from Nicaragua, Peru, and the Dominican Republic. Moreover, it also included andullo tobacco in the filler blend: Andullo tobacco involves a special method of wrapping and fermenting tobacco in leaves from a banana tree, imparting a unique and distinctive flavor. This Tiffany Limited Edition version features the same components as the original but in a slightly different blend. It's a singular 7" x 38 Lancero vitola, handmade at the La Aurora factory — the oldest cigar factory in the Dominican Republic and known for its andullo method — and the Tiffany version is marked by a second band of skyblue evocative of the color made famous by Tiffany & Co. 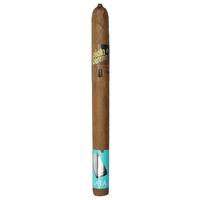 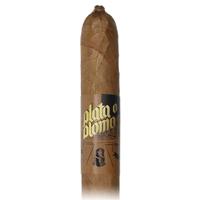