Made in Italy from fermented American and Italian dark-fired Kentucky tobaccos, Toscano cigars differ from their Caribbean counterparts in that they don't have to be stored in a humidor to retain their quality. Referred to as dry cigars or "cheroots," Toscano cigars are perfect for travel and casual everyday enjoyment, and due to their strength and length, they're traditionally smoked ammezzato — cut in half rather than smoked in their entirety, effectively providing two smokes per cigar. The Toscanello offerings, though, are already offered in ammessato size, making for even more convenience and portability. Here, Toscano's Toscanello Aroma Anicee dry cigars are flavored with the natural essence of anise — offered in packs of five. 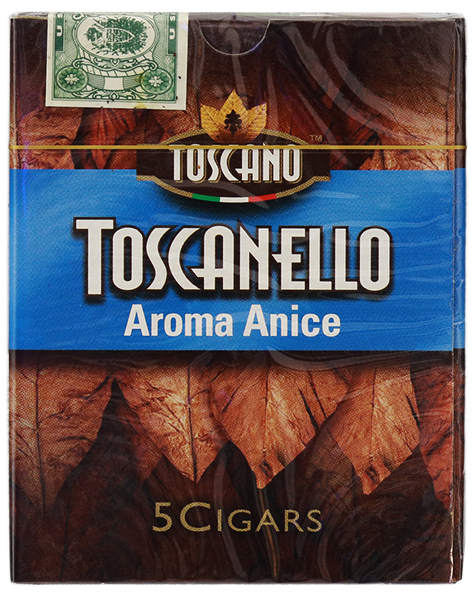 Customer Reviews (2 Total)
Write A Review
Write a review
Overall Rating:
3.75 out of 5 stars
Excellent
By: Timothy T.
Product: Toscano Toscanello Aroma Anice
I don't much smoke cigars, pipes being my normal thing, however these were a very nice change of pace. Bold in flavor, fairly strong in nicotine, but the short length/small ring size makes them quite tolerable even when running on empty. The anise ... Read More was muted and sweet, kind of a sambuca, and very pleasant. I'll be buying these again at some point. Read Less
Different taste! Verry nice
By: Eric C.
Product: Toscano Toscanello Aroma Anice
One off my favorite cigar.
Customers Who Smoked Toscanello Aroma Anice Also Smoked:
Ashton