Though most widely known for having been shot, Archduke Franz Ferdinand was a real person, and thus had an actual life before and beyond his often brief mention in high school textbooks. The complexities of royal lineage led to Franz backing into his position as heir to the Austro-Hungarian throne, and the complexities of politics spelled his death. A complex character himself, he was described as wild for the hunt and well-traveled, casting a dark shadow amongst the foppishness of Austrian high society at the time, stormy in temperament yet morally earnest, with an ambition to strengthen the position of the central throne not by tightening down, but by rendering the empire's various nationalities greater autonomy; his final words, with a bullet in his neck, were a plea to his mortally wounded wife to live for their children.

With all that complexity behind a single name, what was Sutliff to do but create a complex blend: a vanilla aromatic mixture derived from the just-right combination of seven different sub-blends. 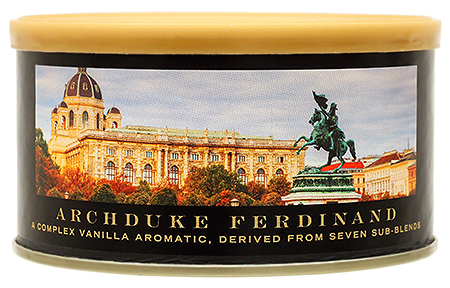 Customer Reviews (5 Total)
Write A Review
Write a review
Overall Rating:
3.50 out of 5 stars
Very Pleasant
By: nmandrus
Product: Sutliff Archduke Ferdinand 1.5oz
Tin note is very good, sweet and dark. A bit too moist out of the tin and the first bowl was a tad goopey as a result. The next bowl's worth was dried on the lid for two minutes (long enough to make k-cup coffee) and was excellent. Going for a walk i... Read More n the woods and smoking some has my wife saying I 'smell all manly' and loving up on me. Read Less
Weaker than others
By: Robert M.
Product: Sutliff Archduke Ferdinand 1.5oz
This blend while mellow is weaker than other Sutliff mixtures as it comes to taste. As you would expect from Sutliff this is a good smoking mellow aromatic but less flavor than....say Barbados Plantation.
So Mellow
By: Adultso Fah-Q
Product: Sutliff Archduke Ferdinand 1.5oz
I think that I read somewhere that this particular blend isn't going to be around for very much longer. Or that it is no longer in production. Whether this means for the season or forever is beyond me although...This blend is very, VERY intricate. I ... Read More prefer the more distinctly flavored blends personally, but good taste is in the tongue of the taster. If you like complex meditations in finding hidden flavors, this is your s*** right here! With this, it's almost feasible to have a different smoking experience every time depending on your stoking technique. If you've been at this awhile, you're probably picking up what I'm laying down. All in all, it's a very complex & mellow smoke with lots of nutty vanilla flavors waiting in it's background for the experienced stoker that knows how to find them. Four & a half stars if it's your bag I'm guessing, but only three & a half for me since I prefer the more distinct blends... Read Less
Very pleasant.
By: CONSTRUCTism
Product: Sutliff Archduke Ferdinand 1.5oz
I enjoyed this tin probably more than I was expecting to. Other than Mountain Pass I would say this is my favorite from Sutliff.
Pleasing
By: truculentfrogs
Product: Sutliff Archduke Ferdinand 1.5oz
Despite the grandiose name, this was a pleasant discovery. Whatever the 7 tobaccos are, they are well crafted, with good burn rate and flavor. Went through the tin rather quickly and will reorder again.