Jess Chonowitsch has had one of the most illustrious careers in the history of pipe making, not only coming from a famous father in Emil Chonowitsch, but beginning his career under the tutelage of Poul Rasmussen, for whom he repaired pipes. Learning the fundamentals of pipe function there, Chonowitsch then moved on to become a carver at the W.Ø. Larsen factory after Rasmussen's death. Until this point, Chonowitsch's career trajectory has looked remarkably like that of Hans "Former" Nielsen's, but it is here that Jess diverges, instead finding himself in the workshop of none other than Sixten Ivarsson, arguably the father of modern Danish design. After two years with Sixten, where Chonowitsch learned the importance of mouthpiece design and fit and finish, he began making pipes in a small workshop together with his father. Today Jess has been carving pipes for over 50 years, and each example that he crafts is a testament to the experience and knowledge he has gained in that time, his work almost universally lauded as some of the best in the pipe world. This Horn is one of those testaments, a pipe which speaks for itself both in its exemplary design and its phenomenal shaping.

I've said before that the paneled Horn is one of the most difficult shapes, in my opinion, to craft, as it fuses two disparate concepts together and, in order to be successful, it must do so perfectly. I think that here, Chonowitsch has come as close to that as possible, marrying the opposing ideas of structure and softness, creating fluidity out of rigidity, and doing so flawlessly. The continuous undercurve of this pipe is unbroken, running from button to rim in a languid forward urge, mirroring that of the topside as well, which, likewise, features a consistent curvature to the rim. Both top and bottom, curves are framed by a pair of ridgelines that start at the bit and follow through to the rim, meeting and marking a domed section of the briar. The aerial perspective is my favorite one to view this piece, as it is there we can see that the top curve is smaller than the bottom, the ridges on its sides also marking a slope that feeds into the larger section of the underside. This shape is imbued with a palpable sense of forward momentum which urges the rim forward, and the dome that defines it seems a natural extension of this, the gradual, constant flare of the shape emphasizing it even more so. The grain on display here is exemplary, and Chonowitsch has done well to account for it, as the horizontal striations of the briar run continuously from the left flank of the shank end to the right in a singular strip that drapes over the rim as well, curving with the shape of the pipe itself and rendering the fore and aft sides a perfect canvass for birdseye. That birdseye is paralyzingly gorgeous, and both sides have it in dense swaths, each a veritable sea of the swirling vortices, the pinpricks that dot them nearly innumerable in quantity. 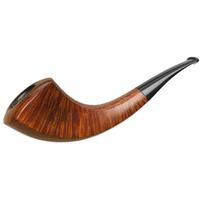 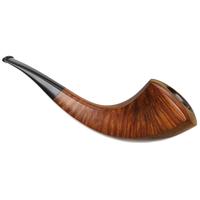 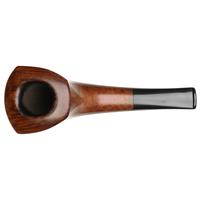 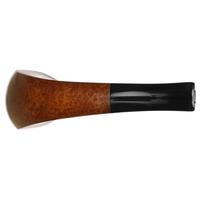 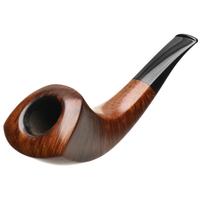 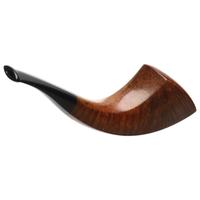 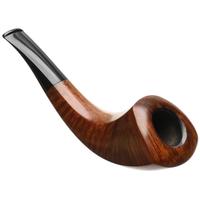 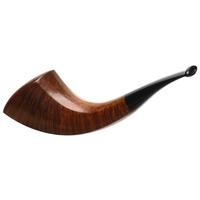 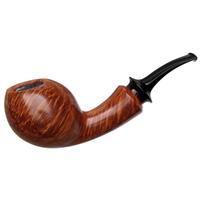 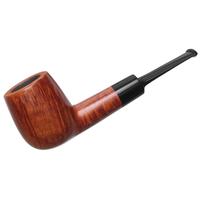 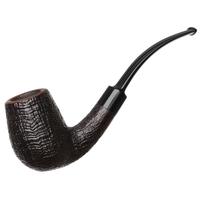 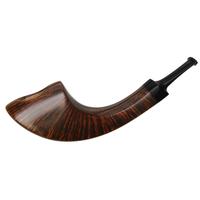 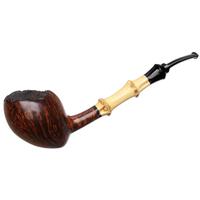 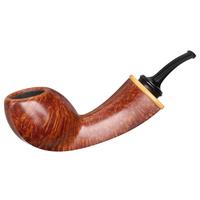