Living legend Hans "Former" Nielsen began his over six decade-long pipe making career at the age of 15, marking the start of a highly influential tenure that brought with it a swath of artisans who studied under him, his path changing world of pipe making. After two years spent repairing pipes in Poul Rasmussen's shop in Copenhagen, Former was enlisted into the military, making his way to the W.Ø. Larsen workshop at 21 where he first began carving. In his time there he made his way to a supervisory position, where he oversaw the work of many soon-to-be artisans including Teddy Knudsen and Jess Chonowitsch, before striking out on his own after ten years. This Tomato here is an earlier example of his work, and it displays traits that have become iconic to his current work, with soft, supple curves throughout and a palpable organicism.

The stem is a svelte saddle arrangement of black vulcanite that takes on a demure downturn at the bit, languidly flowing into a trim, sharply upturned shank that poises it for comfortable smoking. In addition, this combination offers an elegant stature overall, with the shank's curve into the transition completing an S-curve from the stem and the duo's slight aerial presence pulling some of the visual weight away from the bowl, effectively placing the focus at the transition. Beneath, there is an easy, sweeping curvature through the underside which starts at the stem base, plunging through and into the heel and rising at the fore, bringing visual focus to the way that this piece develops a sense of fluidity throughout its build, as well as drawing attention to the curves at the bowl and transition, and magnifying those of the shank and stem. A lifted heel brings more attention to the bowl, pushing it into prominence and accentuating its rapid flare from the base to its high-set waistline, this terminating in a rounded taper to the rim which slopes inward slightly to the chamber. Dressing the briar here is a warm mahogany stain that unveils flame grain running alongside the flanks of the stummel and over the rim, while dense fields of birdseye at the fore and aft swirl in bounteous supply. 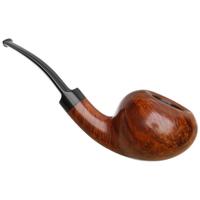 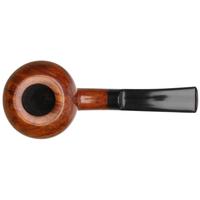 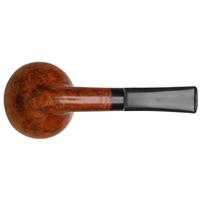 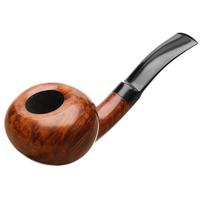 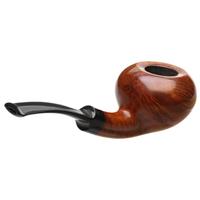