If the artisan pipe world had something equivalent to household names, Tom Eltang would certainly be among them, as the Danish artisan is among the most prolific and accomplished practitioners of the craft. He got his start apprenticing under Anne-Julie, the widow of Poul Rasmussen and a respected artisan in her own right, who taught him finishing and compositional balance and laid the groundwork for the contrast stain that adorns his smooth pipes. Repair work with Pipe-Dan reinforced his knowledge of internal engineering and its importance, and a traveling carver job at Stanwell saw him carving pipes at events all over Europe. Eltang's handmade work is regarded the world over, with this paneled Volcano representing his artisan work and unique shaping style.

In addition to being a fine piece of Danish craftsmanship, this pipe represents a first of its kind for Eltang, at least within his portfolio here, as we've never seen a paneled Volcano rendition from the artisan before. Despite the rarity of this silhouette, Tom has crafted it with all the crisp precision that we've come to expect of his work, especially with regard to the ridges that populate this piece. Across the shank and stem base we see four of these ridges take hold, creating a slightly compressed, rectangular outline that's curved and bowed out at the top and underside, the entire pairing flaring as it reaches toward the stem base before the demurely curved saddle bit makes its downturn. The bowl here is rather unique, as it eschews the large, sweeping base that oftentimes holds the shank as well, in favor of a base that's only a touch larger than the rim, the underside still pushing out and the start still marked by a wrapping ridge. Here the bowl takes on a forward-urging taper to the softly inflated rim, possessed of a quartet of panels whose own ridges serve to enhance the muscular outline of this piece, the panels themselves granted a bit of softness thanks to their curvature. A compact pipe with a wealth of substance, this Volcano merges the firm with the soft, imbuing it with a lovely sense of balance, while its stance contributes an active feel in hand, all enhanced by a stunning contrast stain that reveals beautiful grain: its combination of expert shaping and fantastic grain earning it a coveted Snail grade. 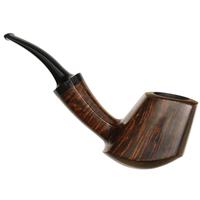 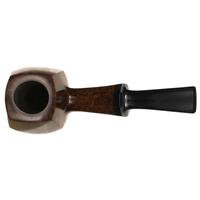 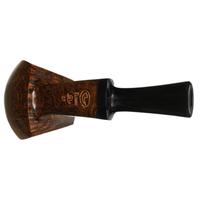 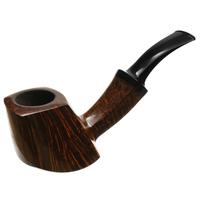 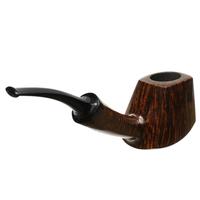