Jonas Rosengren is a Swedish pipe maker who has received instruction from Vollmer & Nilsson as well as Love Geiger and Sara Mossberg of Geiger pipes. Jonas was first introduced to pipe making from knife maker Börje Thelberg who had also developed an interest in the hobby and soon Jonas was introduced to esteemed Swedish carver Bengt Carlson. Rosengren is also a woodworking instructor and produces about 50 pipes a year with one of his creations presented here. It's a lovely Acorn rendition, with the bowl's flanks tapering down toward the subtle heel spur. The ridgeline created by the teardrop shank continues through the heel spur and wraps around the bowl's fore before meeting the chamfered rim, adding texture to an otherwise smooth piece. The grain orientation is wonderful, with streaks of flame grain rising along the flanks while the creamy horn accent nicely complements the stummel's walnut contrast stain. 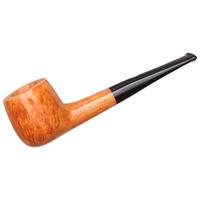