Andrey Grigoriev is a Russian engineer who first began making pipes as a hobby in 2004. In 2006 he met another Russian, pipe artisan Victor Yashtylov, and became his pupil, later working in Victor's workshop as an apprentice and learning his techniques. In keeping with its Russian heritage, this bent Brandy displays a lot of the St. Petersburg design school, with compact, muscular proportions, a smoothly rounded and tapered bowl, distinct checking at the transition, and a stout, up-curving shank. Andrey's attention to the grain is to be commended, as he as brought out stunning flame grain on the stummel's flanks and a dense field of birdseye on the broad heel and the shank's underside. The shank swells slightly in the middle, before narrowing and flaring at the stem base, for a sinuous, organic aesthetic. An abbreviated, finely hand-cut saddle stem of vulcanite offers a broad, lithe fishtail as it curls slightly downward, offering a comfortable smoke while keeping the visual weight on the beautiful stummel. 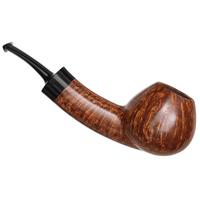 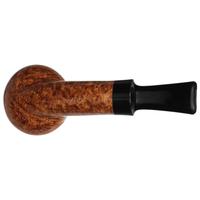 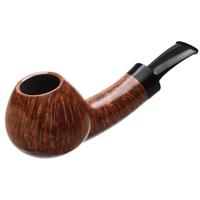