Todd Johnson is an icon of American pipe artistry, with a worldwide influence and peerless portfolio of sculptural designs. Someday there will be a museum paying tribute to Todd's skill, and creative vision, and this Hoplite-grade piece from 2005 will be in it. With a masters degree in aesthetics from Yale and decades spent perfecting his craft, Johnson treats each pipe as a special collaboration between the block of briar and his own imagination, and he brought a couple extra friends, which is to say accent materials, to the party on this one. A towering, 11-inch-tall Freehand, this incredible pipe looks like something that grew in nature, but not in this world, on some far-off planet where bamboo and briar coexist peacefully in the same plant.

The stummel begins with a flattened foot that extends past the transition and flares to provide a pedestal for the piece to balance on. The transition, then, looks to be a branch coming off the side of the darkly sandblasted, bark-like base, but quickly expands into a gnarly knuckle of dark bamboo. From this bamboo extension, the bowl expands and undulates upward, just like a plume of smoke, with tendrils of upswept grain and a lithe ridgeline on the left flank all giving it upward momentum. The expansion ends with an encircling ridgeline, from which the bowl rounds softly to a rim alive with a crown of plateau, before sinking, crater-like into the center of the plume in a tall chamfer.

Another extension of bamboo rises nearly vertically from the briar base, with no less than five knuckles of the dark material climbing, arrow-straight, toward a thin ring of mammoth. A cumberland stem sprouts upward from that point, thrusting toward a concave expansion that mirrors the bamboo's curvature. After the expansion ring, the stem makes a nearly full bend, reducing quickly to one of Todd's superlative hand-shaped lip buttons. The stem, bowl, and foot are all fitted together with stainless steel tenons for strength, longevity, and ease of disassembly for cleaning, and, incredibly this pipe has never been smoked. 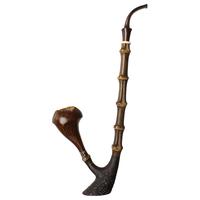 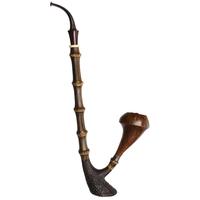 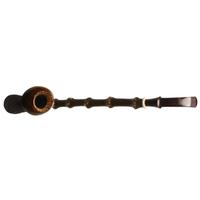 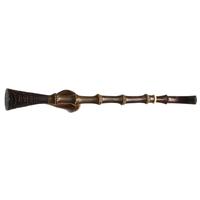 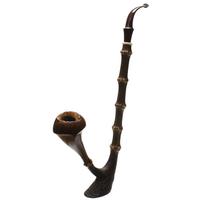 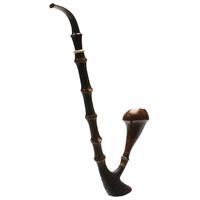 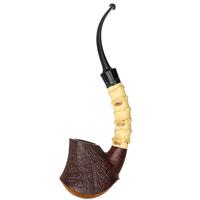 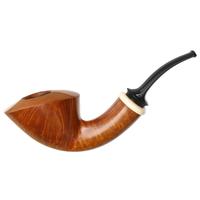 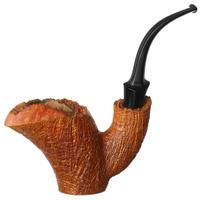