This Volcano design is a shape we've seen before from Clark Layton, in both smooth and with the sandblasted finish of this rendition. In profile it hews closely to the traditional Volcano form, with a broad-based, tapered bowl on the end of a gentle transition. Without a defined heel, the entire underside of the stummel is curved and rounded consistently below the crisp ridgeline separating top from bottom. When viewed from above, however, one can see Layton's creative liberties at play, specifically at the shank. Splayed and flaring, the shank resembles that of Tom Eltang's Eskimo shape, making for quite a wide profile without sacrificing any in-hand comfort. Clark has shaped this piece incredibly well according to the briar's grain too, the crisp sandblast accentuating handsome growth rings along the bowl and whorls of birdseye along the underside. Beautiful work. 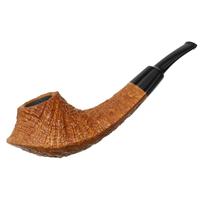 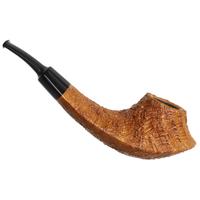 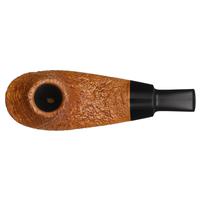 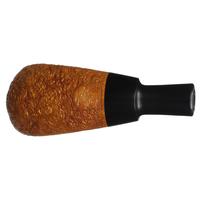