It is no exaggeration when I say that Todd Johnson is one of, if not the most, highly regarded artisans in all of the United States, and that his name carries with it a weight that is nearly universally recognized in the greater pipe community. His fascination with pipes began around the same time he started carving: in the Spring of 2000, when he carved a walnut pipe for a friend's graduation, leveraging his skills and tools as a woodworker to do so. From there he was hooked, receiving critique and instruction from Trever Talbert before visiting Tom Eltang in the winter of 2001, Eltang teaching him his techniques for drilling and shaping, as well as imbuing him with a great appreciation for the Danish school of design. Johnson went on to earn a master's degree in aesthetics from Yale, something that, combined with the respect he has garnered for shaping styles from around the world, lends him an utterly singular outlook for the form his own pieces take, as seen clearly in this Art Deco Blowfish.

It's fair to say that Todd Johnson is a master of many things, but one thing he excels at is presenting us with whimsical, novel takes on classic forms, or even designs the likes of which we've never seen before. This piece bridges that gap quite efficiently, as it's a deviation from a familiar silhouette, but also one I've never seen anything even similar to, acting as a portmanteau of the Blowfish and the Cavalier, though with a distinct Art Deco styling. The stem here is a well bent stretch of swirling, ruby-hued Bakelite whose base is adorned with a trim ring of a lighter hue, matching the cap on the other side of the shank. Said shank is vertical, tapering down from the face to the cap, ending in a slight point and presenting with a build that's stylistically similar to functional Cavaliers, though the cap here isn't removable and the shank doesn't feature drilling all the way through, making the resemblance almost purely aesthetic. I say almost because the striking stance that this alteration enables lends the pipe a fantastic posture for jaw-hanging.

The transition is rather pinched, coming out of the side of the shank, and slightly cheeked, erupting into a hearty bowl that showcases all of the lovely asymmetry one expects from a Blowfish. The iconic dual panels are resplendent across this bowl, the pair's travel marked by a distinctive undulation throughout, though especially at the fore, and this is thanks to the overall build of the bowl itself. Rather than simply pushing out from the transition, the bowl here instead goes on a curving, twisting path that carries with a great deal of implied movement, making for a pipe that is extremely active up front. The entire outline turns right as it grows outward, and the ridges that denote the panels follow this outline, though at the bottom of the fore the pair curve in the opposite direction before getting back on the expected path. A warm mahogany stain dresses this piece, revealing vast swaths of birdseye on either flank of the bowl, the twin Bakelite accents standing out vibrantly against it and reinforcing the Art Deco aspect of the pipe's name. 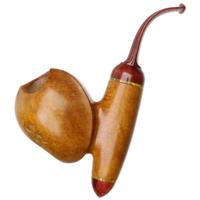 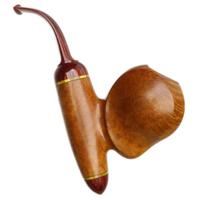 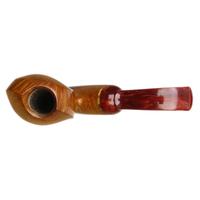 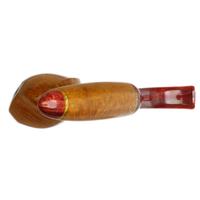 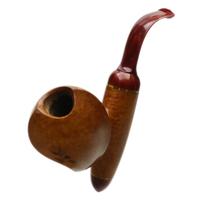 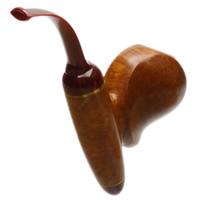 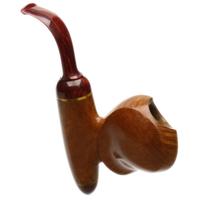