Long before it was the norm, and before the internet made research and global communication easy, Todd Johnson journeyed to Denmark to study under the world's premier pipe makers, including Tom Eltang and Anne Julie. His Master's degree in aesthetics from Yale certainly aided his stylistic predictions, but it was in the workshops of those aforementioned Danes that Johnson learned about technique, engineering, and what makes a pipe great. Though Johnson champions the Danish style of pipe making, he developed a unique visual style all his own, one that often embraces the organic and highly sculptural, which is obvious when considering this Freehand.

A true pipe-as-art design, this piece perfectly marries the organic with the sculpted. At first glace, this Freehand brings to mind the Cavalier, with its extended, scaffold-like shank-and-stem arrangement, protruding foot, and outwardly protruding bowl. However, the foot of this piece, while it does enable stable sitting, can not be removed to drain excess moisture, and the entire frame, comprising the shank, stem, and foot, is far more fluid in its construction than other renditions of the shape, winding and bending as it does around the bowl. Similar to a Rhodesian or Bulldog, the bowl features a domed rim and a wrapping ridgeline around its waistline, while the innermost part of the rim is set at a lopsided angle and displays a touch of plateau, further reinforcing the organicism of the pipe. It's presented in a glossy, honey-hued smooth finish that showcases streaks of flame grain around the bowl and whorls of birdseye along the rim. It's a beautiful, eye-catching design, so it's no wonder that Johnson gave it his esteemed Hoplite grade. 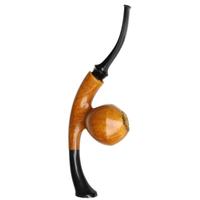 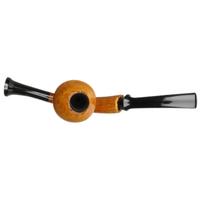 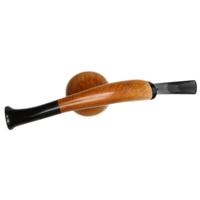 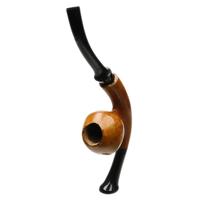 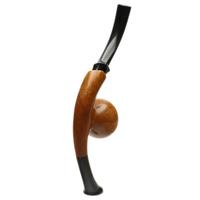 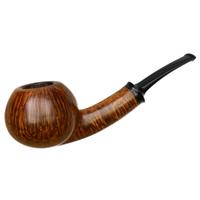