In this Volcano rendition, Scott Klein has specifically riffed off of Hiroyuki Tokutomi's signature take on the shape. Toku's design retains the form's typical conventions — the bowl rising sloped and tapered to the rim and being separated from the underside by a ridgeline wrapping the lower bowl — but the Japanese master notably adds in his own creative flourishes. Typically, such whimsy is apparent in the shaping of the shank: When viewed in profile, the shank end flicks upward, like a rolling wave about to rise and crest over the bowl. The Japanese artisan also imbues the shank with a sweeping gesture from an aerial perspective, the shape's undergirding ridgeline flaring into panels and curling off to one side before terminating at a point.

Scott owns one of Toku's signature Volcanoes, and that piece inspired this version from the American carver. Like Tokutomi, Klein has played with asymmetry — the bottom right of the bowl sloping downward when viewed head on, while from an aerial vantage point the shank curls to the left. The latter cue is reminiscent of Toku's work; however, Scott has rendered it more subtle here, the curve being more reserved and the terminating point less dramatic. The finish also hearkens to Scott's personal Toku Volcano. About the horizontal ridgeline, Klein has executed a fine-textured sandblast that gradually dissipates into the bowl and underside, with subtly dimpled flecks dotting the bowl and a section of natural plateau adding texture to the whorls of birdseye along the underbelly. Lastly, the base of the stem echoes the slanted end of the shank, rounding out the composition and aligning with yet another of Toku's shaping conventions. It's a gorgeous homage to the Japanese carver's influence on modern artisan pipe making and a testament to Scott's interpretation and incorporation of specific design cues. 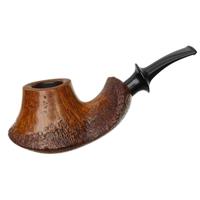