Adam Davidson is many things: a graduate of Purdue University with a degree in industrial design, an absolutely instrumental part of our team here at Smokingpipes as our estates manager, and a massively accomplished artisan pipe carver in his own right. Of course, these are simply the great strokes in the finely detailed painting that is Mr. Davidson, but, were I to describe to you every nano-angstrom of his being, we would both be here all day. I will say, however, that his pipes are quite stunning, displaying a good deal of influence from the American school in general, as well as the Japanese and Danish schools of pipe design. This Blowfish in particular showcases a good deal of that Japanese influence, not simply due to its use of bamboo, but due to the far more reserved shaping on display here, feeling less dramatized than many other iterations of this profile. Created in 2007, this was one of Adam's earlier pipes, and it displays the incredible talent he had for shaping and engineering even at such an early stage in his career. In addition, this makes it quite a rare piece, something which is magnified through the use of cumberland for the stem, a material that, by his own admission, he has only used a handful of times, though it is used to great effect here. This stem comprises a sleek saddle that's fitted to a three-knuckle stretch of bamboo at a junction marked with a slim ring of mammoth ivory, utilizing an extended metal tenon to ensure a good fit and add extra strength to the combination. The base of the stem is adorned with a single wide expansion ring, dramatizing the rhythm of the bamboo in concert with the more reserved mammoth ring and drawing some of the visual weight away from the bowl. Said bowl showcases a panel orientation that I have seen quite seldomly, starting a wrapping ridgeline at the wide transition which drapes over the top of the bowl and plunges beneath, creating a firm spur and the panel on the right flank. The left comes out as this first ridge reaches over past the spur without continuing through the heel, coming to a similar point on the left flank before it wraps around there as well, essentially creating an economy of facets that magnifies the shaping here and highlights Davidson's skill. Dressing the briar is a warm honey-mahogany stain which reveals swirling birdseye on either side of the bowl, its hues contrasted by the stem's. Somehow, after more than a decade, this piece remains unsmoked. 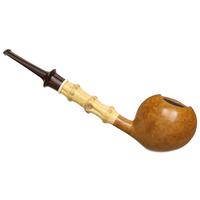 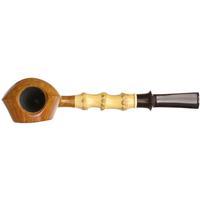 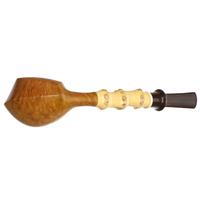 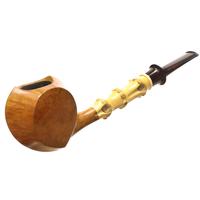 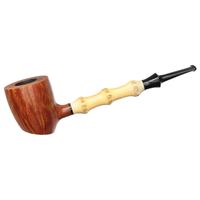 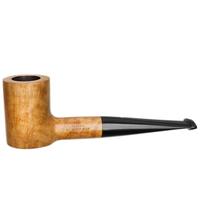 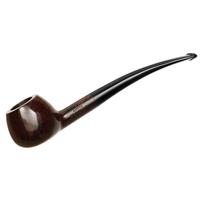