It is no exaggeration when I say that Todd Johnson is one of, if not the most, highly regarded artisans in all of the United States, and that his name carries with it a weight that is nearly universally recognized in the greater pipe community. His fascination with pipes began around the same time he started carving: in the Spring of 2000, when he carved a walnut pipe for a friend's graduation, leveraging his skills and tools as a woodworker to do so. From there he was hooked, receiving critique and instruction from Trever Talbert before visiting Tom Eltang in the winter of 2001, Eltang teaching him his techniques for drilling and shaping, as well as imbuing him with a great appreciation for the Danish school of design. Johnson went on to earn a master's degree in aesthetics from Yale, something that, combined with the respect he has garnered for shaping styles from around the world, lends him an utterly singular outlook for the form his own pieces take.

This Cup and Ball is an excellent example of that singular outlook, as it comes complete with a feature that's very seldom seen in the pipe world: a leather-wrapped shank. This stretch of shank takes on a fluid upturn from out of an extremely well-defined transition, flaring as it reaches its end and meeting a domed saddle stem of cream and brown Bakelite, the two colors achieved by the careful merging of two separate pieces of the material. This shank has been covered in a baby blue-hued leather that's been stitched at the top, creating a center for both visual and tactile intrigue, and this leather meets the Cup and Ball's most iconic element at the transition: a sharp cleft that stylistically separates the "ball" of the bowl from the "cup" of the shank. This cleft is pointed at the underside, though, rather than pushing out from the surface of the briar, this rendition is recessed, and the leather pushes into all of the crevasses that it creates with ease. Said bowl is bulbous and extremely rounded on all sides, making for a feel in hand that's exceptionally comfortable, and a look that's quite soft. The fore of this bowl sits atop a lifted heel, sweeping upward to build the wall nearly in line with the growth of the aft wall, while both ends plump up at the rim for an Acorn-like look that further emphasizes the softness of this piece. As a Phalanx "Q" graded pipe, this piece is indicative of some of Johnson's best work, and it displays some fantastic grain beneath a warm honey-mahogany stain, with the fore of the bowl kissed by plateau near the bottom and covered in dense pinpricks of swirling birdseye. 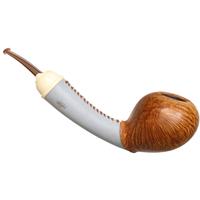 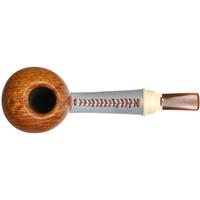 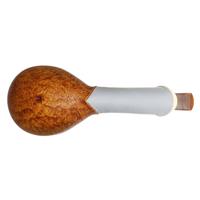 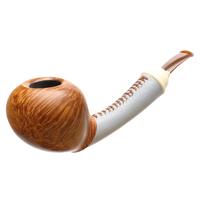 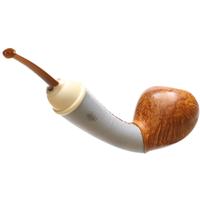 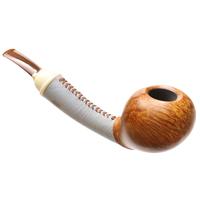