Jeff Gracik is the artisan behind J. Alan pipes, his work among the most collectable of any carver. He studied under Todd Johnson, Tonni Nielsen, and Jody Davis, among others, and boasts an expansive stylistic range. This Freehand is a fine study in precise shaping from the American artisan, combining an artful, sculptural demeanor with a heavy dose of organicism.

The forward-lean is delightful here as the inflated, beveled and asymmetrical rim nearly touches the surface upon which it sits. Jeff has fashioned the bowl so that it seems to turn a bit toward the left, the ridgeline-wrapped rim's pointed lip along with the mammoth accent that comprises the base of this tapering piece oriented in the same direction. A rounded shank is then integrated by four knuckles of bamboo that kicks upward, extending the shank considerably. A slender saddle stem tops things off, with a stylish expansion disc continuing the shaping trajectory of the knuckles. The stummel is wearing a smooth mahogany contrast stain that, along with the bamboo, culminates in a warm, handsome color palette. This is an earlier piece from Jeff, as it's the 41st pipe in his repertoire. 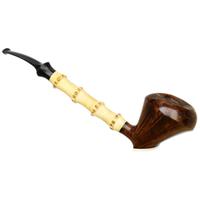 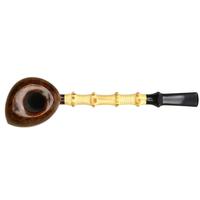 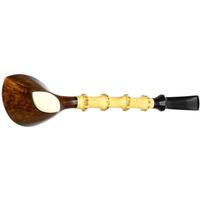 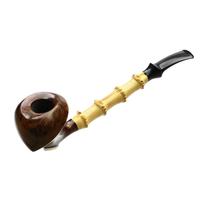