Originally born in Moscow, Russia, Alex Florov is no stranger to precious materials, having spent much of his professional life repairing museum-quality furniture pieces for the Russian antiquities market. He moved to Chicago in 1992 and was challenged by his father-in-law in 2004 to make a pipe, resulting in an ignited passion that's persisted for more than a decade and a legacy that his daughter has since begun to further. The Ryukin is a signature shape for Florov and is named after the Ryukin goldfish, a species that's distinctive thanks to its curved hump behind the head, and was crafted as a subtle nod to the work of Kei-ichi Gotoh and his style of organic Freehand pipes. This shape is composed of a stummel that comprises two distinctive semi-flattened, rounded sections of briar, one acting as the shank and the other as the bowl, that have been carved in a way that resembles river stones. These two segments take on an opposing orientation, here resulting in a bowl that stands nearly upright, while the shank portion looks to have been rotated so its breadth favors the flanks. A great deal of subtle shaping goes into creating this shape, with the shank seeing a firm ridge on the right flank that works in concert with a slightly pronounced, firm heel up front, including a precise rounding of almost every other surface but those aforementioned in this example. Additionally, this specific piece is the shortest of all the Ryukins we've ever seen from Florov, coming in at a pocket-friendly size of less than four and a half inches long. A vibrant auburn stain dresses the stummel, revealing cross grain through all of the flanks and running over the top and underside, while the fore and especially the aft portions of the briar showcase lovely birdseye, the hues of this dressing nicely contrasting the trim black stem. 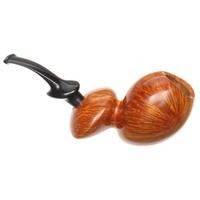 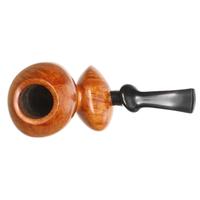 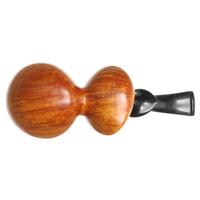 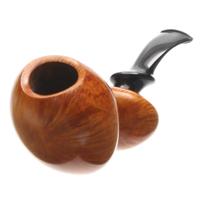