It's part and parcel of the modern artisanal pipemaking world: someone comes up with a shape-type, shows it to their peers (social media making it quite easy to do so), and then somewhere between half of them and all of them start thinking of how they would do such a shape in their own way, much the same as they do with a Billiard or some other design idea that has been around since the days when briars were all made in Saint-Claude. At its best, this produces a point of pride for both the originator and the re-interpreter — for the first in that their original design was an inspiration, and for the second if they successfully create a variation that is both distinct, and attractive in its own right.

Here we have an example of the at-its-best scenario. Adam Davidson came up with the Fig (inspired by his appreciation of the traditional Cutty and wanting to make something alike-yet-different), and in this briar we have an Abe Herbaugh reinterpretation that is conspicuously different-yet-alike compared to Adam's, and a very fine shape just taken on its own. And Abe really did change a lot, his own take introducing more asymmetry, more bend, and a bowl that went from relatively rounded to tapered in a manner which implies the form was captured in mid-leap. The fact that Abe's Fig is a sitter, and Adam's was not, is the least of the differences. 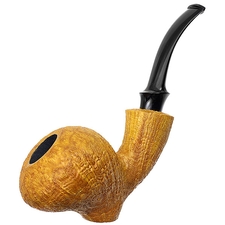 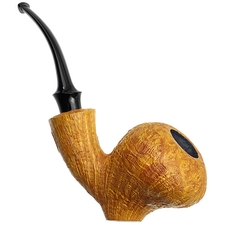 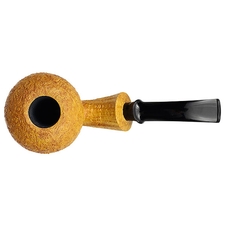