It comes as no surprise to me that Abe Herbaugh, with his penchant for organically evocative shaping and novel use of natural accents, would present us with his own novel take on the "pierced" aesthetic, but this is really something. The bowl itself is more readily evocative of actual sea life than previous iterations we've seen from the carver, with a livelier sense of implied motion, or at least motion implied prior to being impaled with a spear. As for the spear, it actually is bamboo, though not in the form we most commonly see it. Rather than the more oft-seen knuckle-adorned rhizomes which grow below ground, this fellow sports a long stretch of the kind which grows up above, more often spotted in nature. Abe has also turned and polished it well, to the point that it almost evokes the look of something like black palm. Pairing it at one end with a succinct, lightly downturned saddle-stem, and at the other with a lightly flared base, both of which are removable by way of stainless steel tenons, it's rendered into a fully-functional Cavalier. Abe's even imbued it with the ability to sit on a flat surface, it's a piece unlike anything we've seen from Abe yet, and I'm hoping it isn't the last. 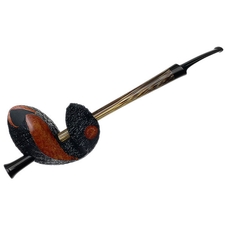 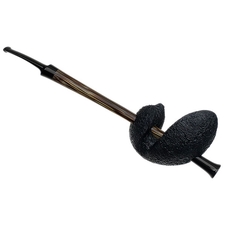 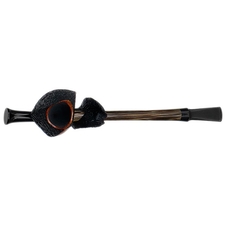 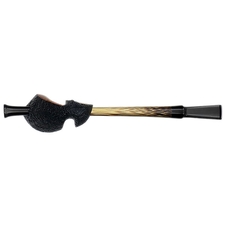 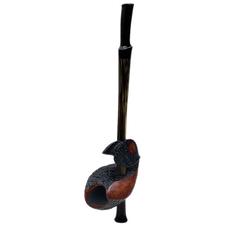