Happy Fourth of July! Though we're still taking calls and shipping boxes, because of the holiday, our Customer Service call lines will be open from 10a EDT to 5p EDT today, rather than the usual 9a EDT to 7p EDT. We'll resume our normal service hours tomorrow.
New Pipes » Abe Herbaugh » Partially Sandblasted Speared Fish with Bamboo

Abe Herbaugh is an artisan whose style ranges from the highly classical to the wildly organic, with incredibly intricate and elaborately shaped, Fish Freehands. This Speared Fish entry into 2019's American Pipemaking Exposition certainly falls into that latter end of the Vermont-based carver's shaping spectrum. The "speared" motif is one that's been used by a number of carvers (including Herbaugh in the past), but it's unique in Abe's hands, featuring the artisan's recognizably fluid and dynamic style.

In profile, the long section of bamboo that "spears" the bowl is the first element of note. Lithe and slender, the tight-knit knuckles are beautifully spaced and stack one on top of the other, drawing the eye to the slight taper it possesses from heel to bit. Though the piece as a whole is rather large and complex, Herbaugh's use of such clean-lined and svelte bamboo keeps the form impressively lithe and light in silhouette.

The bowl, then, boasts Abe's impressive craftsmanship. Fluid of form and slightly asymmetric, it tapers into a trim tail that Herbaugh has coiled around the bamboo (not unlike Joao Reis's and Sabina Santos's Tadopole iterations), lending the impression the fish it resembles is still alive and moving. The rim has been finished smooth and polished, adorned in straight grain, while the rest of the stummel is deftly sandblasted and contrast stained — a testament to Herbaugh's skill, considering the tight-knit and intricate shaping of the briar. Topping it all off, the protruding bamboo heel is capped with a vulcanite foot, the bamboo's natural groove extending through the ebonite. Said foot is flattened, allowing the piece to sit upright in dramatic fashion, and it can be removed to offer the cleaning and moisture-draining capabilities of a fully functioning Cavalier. 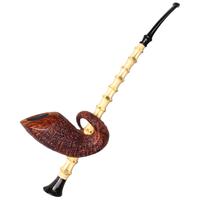 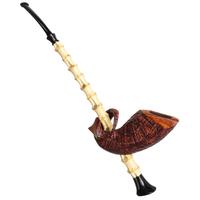 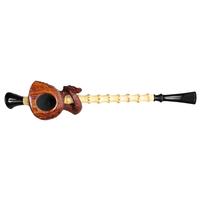 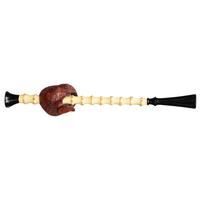 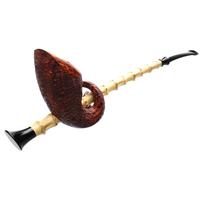