Though originally pioneered by the legendary Jess Chonowitsch, the Mushroom has become somewhat ubiquitous in the pipe-making world, with many carvers putting their unique spin on the distinctive shape. American carver Abe Herbaugh fashions the Mushroom with some regularity, often tweaking the design and coming up with new ways to accentuate the form's gestural nature. This particular example trades the upward-curling transition found in Chonowitsch's traditional form for a more Horn-like build through the shank-and-stem arrangement. The broad, domed rim gives way to a subtle yet consistent taper that slenderizes the bowl and shank and accentuates the form's flowing sense of line. A teardrop-like ridgeline drops from one edge of the rim and sweeps across one side of the shank, adding a touch of muscular definition and asymmetry to the composition. The slightly sloped shoulders of the saddle stem mirror the offset shaping of the stummel, creating a clear visual motif from one end of the pipe to the other. The smoothly polished rim displays a wild confluence of birdseye and cross grain, all under a handsome auburn stain that contrasts against the rest of the stumble's crisp, earthy sandblast. 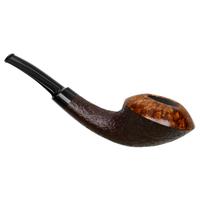 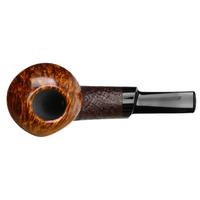 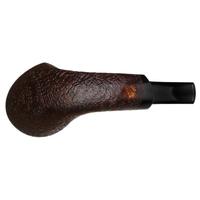 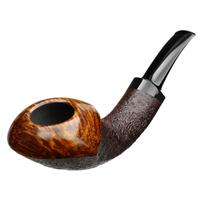 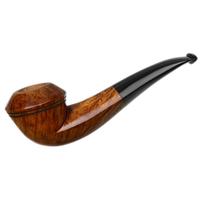