I can't overstate how much I love the work of Abe Herbaugh; each time I encounter it, I'm met with something new, something novel, something that pushes the boundaries of artisan pipe making in fun and interesting directions. His ten years of experience as a luthier assisted the start of his journey as an artisan carver, giving him access to tools and developing within him a good eye for line and shaping; these aspects just needed retrofitting to account for the unique requirements of pipes as opposed to guitars. His first pipes were carved as an autodidact, learning the craft from trial and error before receiving tutelage from already established, veteran carvers, something that accelerated his pace of learning quite a bit. A native Virginian and long time resident of neighboring West Virginia, Herbaugh now carves pipes in Vermont.

The Horn is an incredibly difficult shape to carve, necessitating freehand work throughout the profile and requiring a measured approach to shape the precise curves and flowing outline that makes the shape iconic. Herbaugh is no stranger to this shape, having made a number of different examples in his tenure as a pipe carver, though this particular iteration is my favorite he's done so far. One of the most important aspects of this shape is its consistent expansion as it flows toward the rim, and that's an aspect of the profile which is highlighted especially well here. Herbaugh has gone through what I can only assume was many hours of painstaking effort to make the slow flare of the form as even as possible, lending the pipe a unique kind of balance which, while still favoring the stummel in visual weight, poises the stem in such a way that keeps the eye drawn to it just as much as the fore. The slight ovoid outline of this piece not only lends the fore and aft a touch of compression, but provides a comfortable feel in hand and further emphasizes Abe's talent for shaping. Rather than being fitted with a downturned stem, as many Horns are, this piece has instead been paired to a stem that continues the lines of the stummel, lifting with the shank and ending in a button that sits in line with the rim, creating a profile that's dipped and rises at both ends: a consistent curve which is extremely lively and hearkens to Bo Nordh's signature Oliphant rendition.

The rim itself is domed and surrounded at the bottom by a firm ridge which informs its arcing taper into the chamfered chamber edge. The aft side of this is slightly longer than the fore, lending a touch of forward momentum and a charming bit of extra detail to appreciate. Dressing this pipe is a vibrant auburn contrast stain that defines some incredibly well-oriented grain, with cross grain running through both flanks of the stummel, following the outline of the shape precisely and wrapping over the majority of the rim to meet the other side. The fore, aft, and rear portion of the rim, then, practically explode with birdseye of stunning density that peppers the surface of the briar with innumerable pinpricks, all while the jet-black stem adds a touch of contrast. 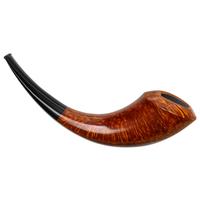 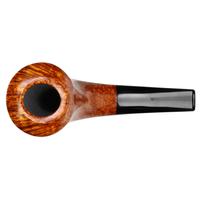 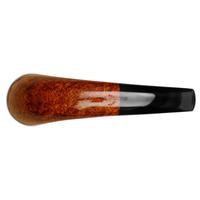 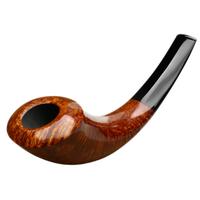 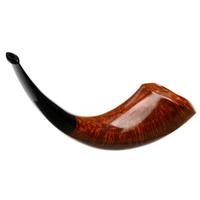 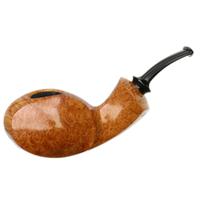