Abe Herbaugh is one of the most accomplished young artisans in America, and is one of my absolute favorites in the pipe making world, not the least because of his start in the craft. For much of his adult life, ten years to be more specific, Herbaugh built electric guitars, though he was inspired to begin carving pipes early in his childhood, thanks to pipe-smoking members of his family. Music runs in his family too: His first several pipes were carved in his father's fiddle workshop, offering a boon to his progress as an autodidact.

Abe's affinity runs the gamut of shapes, from wildly expressive Freehands to expertly crafted shape chart standards such as this straight Billiard, with this specific example additionally showcasing his fondness for Bakelite. The overall shaping here is simply excellent, with a wide transition that allows for the easy draping of a digit, followed immediately by a sleekly tapering shank which meets a domed mount of silver that continues this taper. Though ultimately a minor detail, this continuation of the taper is nearly seamless, smoothly enabling the shank to resolve its shaping in a soft and elegant manner. In addition, this mount extends the reach of the shank, not nearly to the length of a Lovat, but enough to further accentuate that elegance and afford the stem a more gestural posture. Said stem is a stylized saddle of swirling cream and amber Bakelite that underscores the elegance of this pipe even further, its base very slightly flared before a slight, channeled taper and another flare that then dips into the saddle bit. The aft serves to balance the plump, broad-waisted bowl at the fore, its walls taking on a slight taper and dynamic forward cant as they climb to a softly domed rim, providing a wonderful canvas for the dark sandblast dressing the briar. This blast not only reveals some lovely grain, but is contrasted vibrantly by the silver dome and stem, creating a visual draw toward the aft that almost perfectly balances the visual weight. 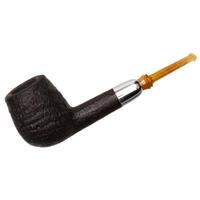 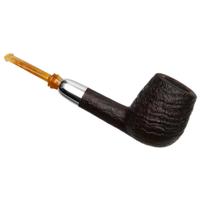 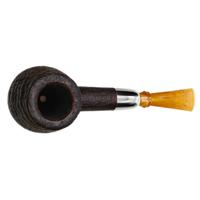 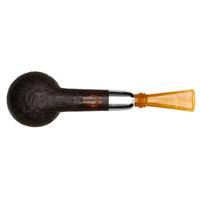 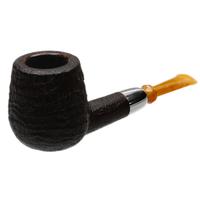