Pioneered by Vladimir Grechukhin, the St. Petersburg school of design has come to influence a great deal of Russia's most notable carvers, and Alexander Tupitsyn in particular. Tupitsyn mentored directly under Greckukhin, and the two even collaborate together, alongside Sergey Dyomin, on PS Studio pipes. It makes sense then that Tupitsyn's pipe-making style would hew close to the compact lengths, muscular proportions, and supple curves that define the St. Petersburg aesthetic. This bent Apple is a perfect embodiment of Tupitsyn's work and showcases the Russian carver's impeccable finishing and accenting work.

While the overall design measures just a touch over five inches in length, the rotund bowl of this piece maintains a muscularity and stockiness to its construction, filling the hand with substance and girth. The shank, in comparison to the bowl, is rather demure and somewhat understated in appearance, but it provides a lithe curvature to the composition in profile. The shank also displays an unevenness in its shaping, with one flank fully rounded while the other side steeply declines into a sweeping ridgeline. The olivewood accent perfectly mirrors the asymmetry of the shank before giving way to a slender saddle stem of jet-black vulcanite, which downturns towards the bit for a comfortable smoking posture. The stummel wears a crisp, ruddy sandblast that coaxes out rippling growth rings across the flanks of the bowl and nicely complements the warm hues of the olivewood accent for a cohesive color palette. 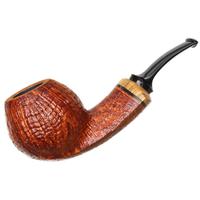 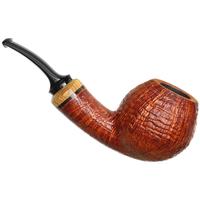 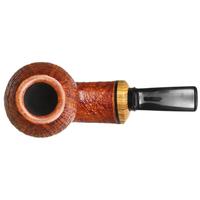 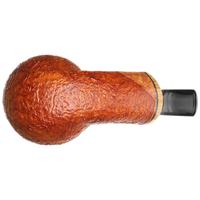 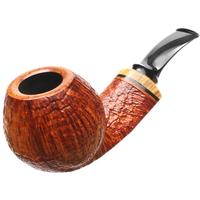