There are few paths into the pipe world better than learning firsthand from a master artisan, and one of these includes being taught by an artisan that is widely considered to be the best in that country and the inheritor of an entire school of design. Alexander Tupitsyn had this incredible good fortune when, in 2008, he joined Vladimir Grechukhin and Sergey Dyomin at PS Studio, learning his craft from Grechukhin himself and starting his pipe making career by carving high-quality smoking instruments designed by Vladimir. In 2012, the studio was visited by legendary Danish artisan Poul Ilsted, who furthered Tupitsyn's learning, showing him finishing methods and instructing him on line work. That same year, Alexander decided to begin making pipes that bore his name, the style he's adopted one which synthesizes both the Danish and St. Petersburg schools of design, all brought together by Tupitsyn's own unique sensibilities.

I'm immediately struck here by the influence of Poul Ilsted, specifically through the seamless confluence of firmness and fluidity, something that's especially prevalent through the shank. Said shank has been carved to feature a pair of sweeping ridgelines running through the flanks, following the curvature of the shank itself as it flows into the transition. The effect of this not only emphasizes the presence of the shank, but serves to separate its top and bottom halves, as well as highlight the transition and bowl. Visual separation can be an extremely useful tool for talented artisans such as Tupitsyn, as, when properly applied, it allows for one to magnify individual elements of construction without detracting from others, and what I see most readily thanks to this separation is the undercurve of the stummel, presenting as a smooth arc from the shank end to the rim. Such a sweeping undercurve further reinforces the presence of smooth lines throughout this pipe, and leads the eye toward the bowl, its continuous path forward lifting the heel and urging the bowl into further prominence.

A rather subtle flare possesses the bowl here, rising evenly and with a supple curvature throughout, terminating at a domed rim that slopes inward toward the chamber, essentially continuing the implied momentum of the curves behind it. This expansion of briar is balanced by the shank's own flare toward the face, where it meets a band of black vulcanite, followed by a pale boxwood accent which reveals a lenticular shape, and it is here that the stem of the same black vulcanite is married to the stummel, its base nestling into the accent for a cohesive look altogether. A warm, deep, auburn-hued sandblast dresses the briar, contrasting handsomely against the boxwood at the shank end, and reveals tight ripples of concentric ring grain throughout the bowl, cascading down from the rim and into the underside, while the rim and top of the shank are home to blasted, textural birdseye. 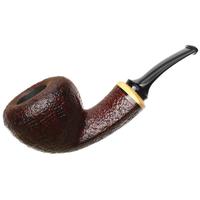 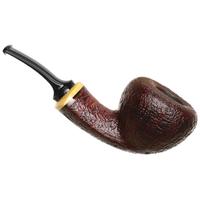 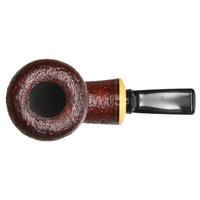 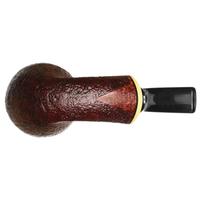 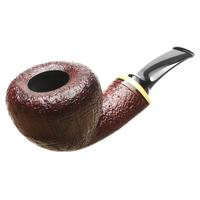 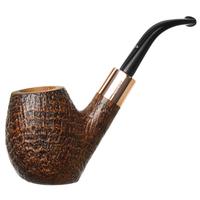 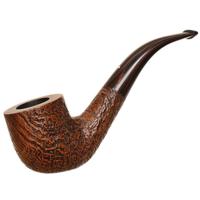 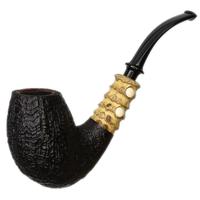 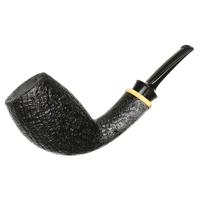 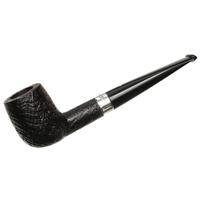