A low and lean quality permeates this piece from Bill Shalosky, its Tomato bowl compressed but without exuding a "squashed" look. Contributing to that visual impression is the wonderful curvature of the underside in profile, continued by the curve of shank and flanks. The rim is sandblasted and concave, and an excellent orientation of growth rings parallels that rim as they stack down the bowl. A subdued contrast stain yields vertical strands of grain surrounding the bowl, while knobs of tight birdseye populate the heel and the rim, as well as the upper and lower portions of the shank. The growth rings carry into the shank and their soft curvature corresponds to the curve of that shank as it rises to the fitment and saddle stem. The stem is designed with an expansion ring to help redirect visual examination back toward the stummel as the flat saddle portion utilizes negative space for reduced visual weight.

The most colorful visual feature here is the fordite accent ring striated in black, yellow, grey and brown, but even so, that ring maintains stately sophistication in a subdued combination. Fordite is a material from automotive factories and is comprised of paint overspray that has collected and hardened over decades, now a very hard, very colorful material, and an impressive accent for such an impressive composition. 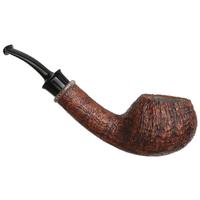 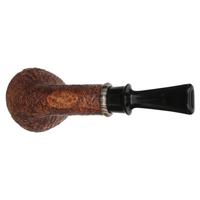 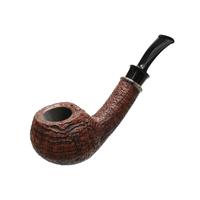 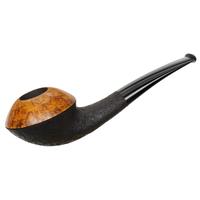 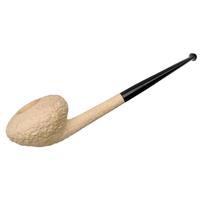