BriarWorks' "C111" and "C52" shapes are both stout Rhodesian renditions inspired by vintage Comoy's designs, with this "C111" representing the bent variety. Such a robust bent Rhodesian has become known as the Bullmoose shape, and it exudes a hearty disposition through the bowl and shank alike — specifically calling to mind Comoy's "499" offering. Set just above the transition, the bowl's characteristic beadlines delineate the rim's diminutive taper while the rest of the bowl remains plump and rounded, the muscularity of the stummel continued through the base of the tapered stem. It's a pipe that's hearty in-hand and substantial in demeanor but still conveniently compact, and this particular "C111F" example has also been drilled to accommodate a 9mm filter in the mortise. 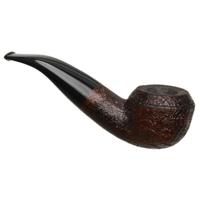