Italian pipe making, traditionally speaking, is known for its dramatic reinterpretations of classic English and French shapes, exaggerating the proportions and/or presenting more stylized finishes. This style is seen especially through the work of such esteemed pipe makers as Castello and Radice, with the likes of Ardor and Ser Jacopo taking those stylistic cues to the extreme at times. Though Davide Iafisco is an Italian pipe maker, his personal style forgoes this traditional Italian aesthetic and hews closer to the design language of Danish, American, and even Japanese carver — the proportions of his pipes more balanced and his portfolio marked by artisan renditions of Brandies, Blowfish, Dublins, and Acorns.

One such Acorn rendition is presented here. Its overall size is on the more compact end, but the bulbous curves of the bowl still fill the palm and lend the piece a presence that belies its shorter length. Shape-wise, it's similar to an Acorn we previously received from Davide — the bowl considerably forward-canted to continue the forward momentum initiated by the sinuous shank and stem combination. In this iteration, though, Iafisco maintained a consistently rounded curvature through the shank, devoid of any hard lines expect for the base of the saddle stem. Said base features a trim panel at the expansion point, tapered slightly to ease the eyes toward the stem and contrasting with the rounded boxwood accent ring at the shank end. Accentuating the shape's organicism, the rim is flecked with natural plateau, blending into the naturally stained sandblast that highlights the stummel's handsome grain pattern. 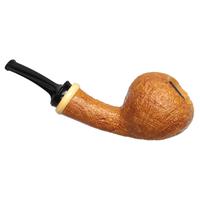 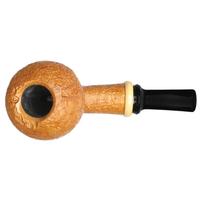 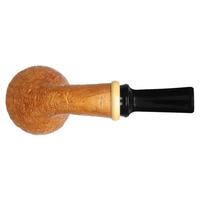 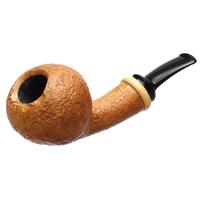 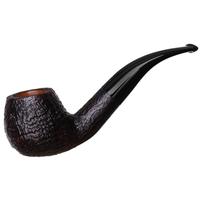 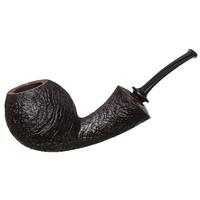 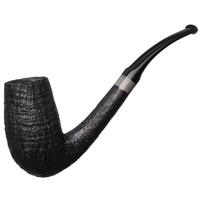