Roman Kovalev: neurologist, race-car builder, distiller, coffee connoisseur, and artisan pipemaker. The carver wears a number of impressive hats, defining the term "Renaissance man." Everything Kovalev touches seems to turn to gold, his Doctor's Pipes notwithstanding, the Russia-based pipemaker having a knack for tenaciously excelling at everything he does, never content with anything short of mastery.

This Horn from Roman displays the typically dramatic proportions seen in his Horn renditions, the slender shank urging forward into the transition and the bowl's extreme flare toward the rim. The stummel highlights a symmetrical orientation of cross grain down each flank, and it's well deserving of Doctor's second highest grade, Double Flash. An aspect for which Kovalev has become renowned in the pipemaking community is his bamboo work. When bamboo was first featured on pipes in the mid-1900s, it was done so quite conservatively and practically — bamboo was used during briar shortages as shank extensions, and as such, straight, uniform ferrules were desired, without much consideration for how they contributed to the pipe's overall composition. Roman, however, is known for his utilization of wild, eccentrically shaped bamboo, and one such piece is showcased here. The shaping of the material is squashed and uneven, the accenting boxwood nodes varying in size and orientation for a highly organic accent. Such a nonuniform motif is echoed throughout the piece, informing the overall composition: The stem base is shaped to reflect the bamboo's nodes, and the rim is inflated more at the aft side, with a small section of plateau at the bowl's fore to accentuate the piece's inherent organicism. 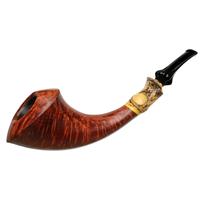 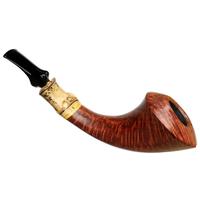 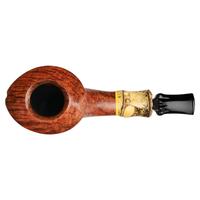 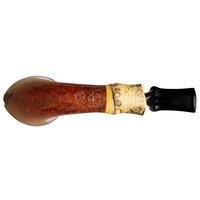 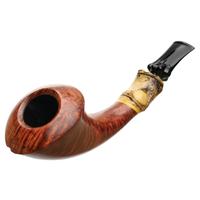 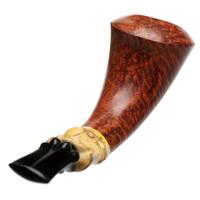 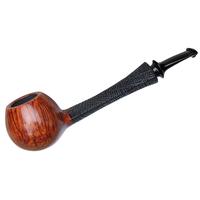 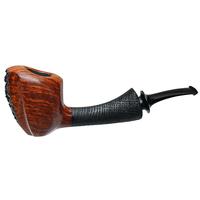 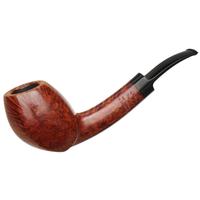