Roman Kovalev is dubbed "Doctor" by his pipe-smoking friends because he is, among many incredible traits, a pediatric neurologist. Thus, when he turned his mental alacrity to pipe making, it only seemed natural his pipes would be called Doctor's Pipes. A Siberian native, Roman began collecting artisanal pipes from the world's best makers, smoking hundreds of them before deciding to take a hand at making his own. We are glad he did because his mastery of the craft is now unquestionable, and his influence on other carvers quite substantial. He was himself influenced by fellow Russian carvers and Danish design aesthetics, yet he developed a style distinctly his own. He often incorporates bamboo and other alternative mediums in his pipes, but while many makers would toss out odd shapes of bamboo, he treasures them and carves incredible pipes made just for those unique pieces. The extra labor associated with his choices is of no consequence to Roman, as his only goal is creating amazing pipes.

This Horn displays quite a bit of Danish influence, with a sweeping, elongated profile, broad, inflated rim, and distinct ridgeline at the aft edge of the bowl. The bowl is asymmetric, wider than it is deep at the rim, a choice governed by the limits of the briar as evidenced by natural plateau on the forward edge. The aft edge rises uniformly with the rest of the bowl, but flares out sharply at the top, creating a ridge that smoothly emerges from the bowl, flows around the rim, then seamlessly rejoins the flank on the other side. The briar flows in incredibly tight striations of cross grain, leaping from the undercurve to race toward the upper side of the stummel. The smooth finish and warm auburn stain do well to accentuate the grain, bringing out birdseye on the top and underside as well as striations that sweep in unity across the broad rim. No matter which way I look at this Horn, I am looking at exquisite grain and brilliant use of it.

One of the things Roman is famous for is his use of bamboo, a reputation he upholds here with a thick section displaying tightly stacked knuckles. As he does with many of the bamboo sections he uses, Roman has cleverly sleeved the bamboo with briar, creating a finely crafted mortise for one of his hand-turned brass tenons to join with. A hand-cut vulcanite stem tops the arrangement off with a promise of the effortless draw one would expect from a pipe of this level of craftsmanship. Inside and out, this piece's fit and finish are exemplary, and Roman was so happy with how it came out that he awarded it his highest Grand Flash grade, an honor only bestowed on about five of his pipes each year. This is only the fifth Grand Flash we have ever received from the Doctor, making it a truly rare offering and one which I will be sorry to see go. 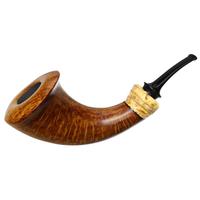 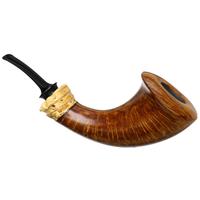 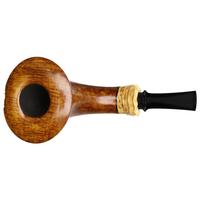 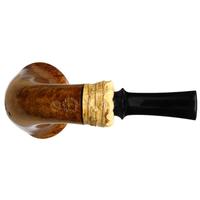 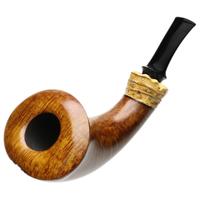 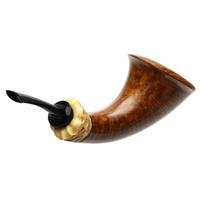 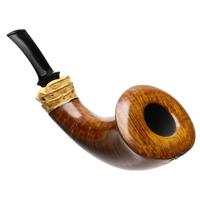 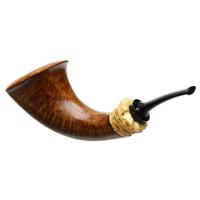 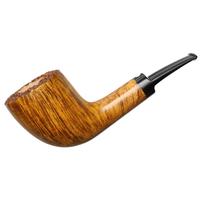