The Calabash is a shape that takes a lot of effort to craft, with a large internal chamber hollowed out to cool and dry smoke, and is historically made from hollow gourds with a removable tobacco chamber and cap. Artisan pipe carvers do make the shape from briar, however, patiently spending long hours hollowing and sanding the interior of large briar blocks and fitting them with innovative cap designs to create beautiful pipes with coveted smoking qualities. Roman Kovalev is one such artisan, but he loves to over-engineer his pipes, to find ways to take them beyond what has been done before, often beyond what anyone thought was possible. This unique Calabash is one such pipe, employing all of the technical characteristics that define the shape, but going one step further.

A pediatric neurologist and polyglot, Roman is unrepentantly obsessed with the details of what goes into a fine pipe and takes inspiration from fellow Russian carvers, Danish masters, and many other pioneers. In this rendition, he has turned his focus and renowned creativity to the rim, and, not satisfied with the typical overhang of the Calabash dome, has instead countersunk the entire removable cap and chamber into a rim of craggy, undulating plateau for a truly unique aesthetic. Did he stop there? Of course not. He then crafted the dome itself from polymerized gray whale bone using one of his proprietary processes and fit it with a briar chamber. The fit and finish inside the cap are perfect, with the supporting rim stained to match the exterior briar and a thin rubber seal snugging everything together.

It wears a honey-blond stain and smooth finish, proudly displaying stunning, dense striations of flame grain that rise in concert with the bowl. Birdseye dots the heel and a slender, oval shank, momentarily distracting me from a sleek, sweeping transition. Roman's work with bamboo is industry-leading, and he does not disappoint here. Two knuckles with craggy striations and stimulating nodules extend the shank, and the Siberian artisan has cleverly sleeved the bamboo's interior with briar. The pale material has been terminated right on a craggy knuckle, subtly matching the natural plateau on the bowl's rim. Even a thin black ring on the shank has been formed in concert with a dimple in the bamboo, every detail working to achieve a level of organicism that must be held to be appreciated. A hand-cut saddle stem of vulcanite turns slightly downward in an inviting gesture, while one of Roman's hand-turned brass tenons offers extra strength and a perfect fit. The overall craftsmanship and creativity in this pipe are unmatched and have earned it Roman's second-highest Double Flash designation, and to say it is merely unique would be doing it a brutal disservice. 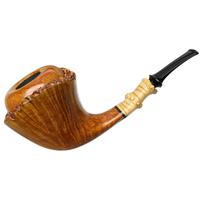 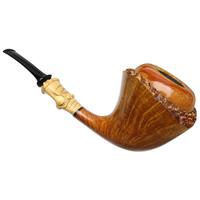 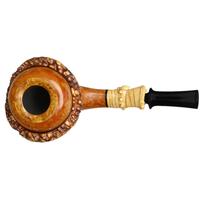 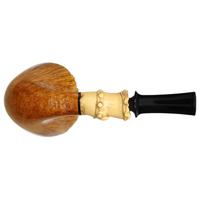 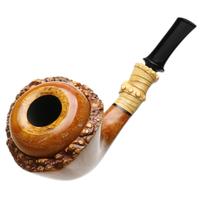 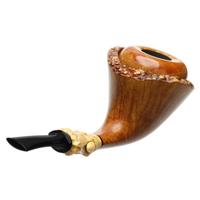 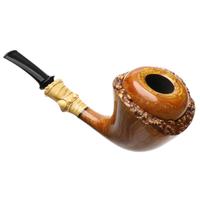 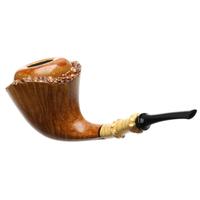