Because of our annual company picnic our call center is closed today. (We're normally open for calls Sundays from 12pm to 4pm Eastern). But feel free to email us, or call and leave a voicemail and we'll get back to you promptly Monday.
New Pipes » Grechukhin » Sandblasted Pear

A pipe maker since the '70s, Vladimir Grechukhin was mentored by Alexei Fyodorov, one of Russia's most celebrated artisan carvers, and has since become regarded as one of the world's most preeminent makers. Over the decades, he's developed a distinct design style that's grown through Vladimir's tutelage of other younger carvers — much in the same manner he received from Fyodorov. Such a design style draws inspiration from Danish pipe design, but often adds considerable muscularity and compact dimensions to that style's svelte curves and plump roundness.

This Pear design reveals that penchant for Danish design, riffing off of certain cues seen across the work of Lars Ivarsson and Jess Chonowitsch — most notably this pipe's teardrop shank. It's something of a sibling to an Apple design we previously received from Grechukhin, but while the two shapes feature similar aspects, the shank of this Pear is considerably more svelte and diminutive. In profile, the shank here is slender and streamlined compared to the bowl, emphasizing the latter's plump, rounded disposition. When viewed from above, though, the bowl's oval shape is evident, matching more with the shank's sleekness than when viewed in profile. Like the aforementioned Fish, the shank bears a ridgeline along the flank and plateau along the face; however, the ridgeline terminates at the transition here instead of continuing through the bowl, preserving its supple shaping. A hint of plateau along the rim mirrors that of that shank face, and both are stained a lighter, reddish hue to contrast the rest of the stummel's dark sandblast. Lastly, the shank face is oriented at a dramatic slant, leaning into the ridgeline and adding asymmetry to the piece, to which Grechukhin has shaped the base of the stem, integrating it with the stummel for beautiful compositional balance. 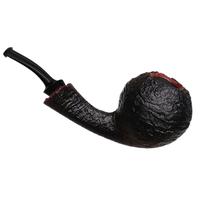 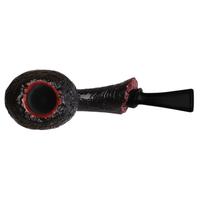 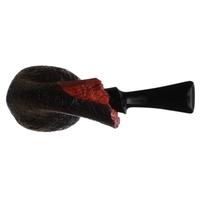 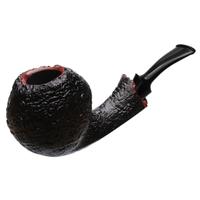