Jacono once again presents us with a proudly neoclassical pipe: a bent Dublin resembling a striking portmanteau of its namesake, the Hawkbill, and the Pickaxe. The stem and shank form a continuous, aquiline arch that terminates at the heel in a pronounced and dramatic point. There is a palpable momentum that this piece carries, as if it is, at all times, rushing forward, especially given its streamlined shape and heavily forward canting bowl that looks primed to slice through the air. The silhouette is highly angular, seemingly defined by its angles, but to say this would be disingenuous and would discount the role that the fluid curves of this pipe play in making it so alluring. Dressed in a smooth creamed-coffee stain and paired to a jet-black stem, this unique Dublin is sure to impress. 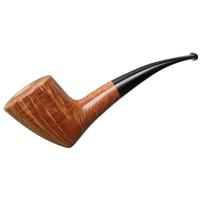 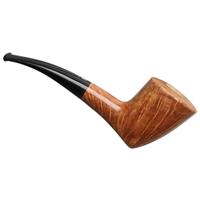 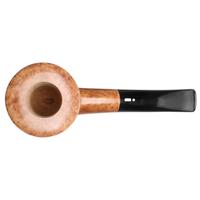 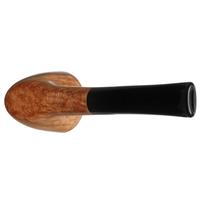