Bamboo became more widely used in pipe making after World War II, when briar was in short supply. The labor-intensive material has been used as accents or shank extensions for years, with Sixten Ivarsson also promoting the use of the pale medium as an integral part of the pipe's artful composition. This notion caught on with other artisans, naturally, and has evolved even more. Now, innovative carvers such as Roman Kovalev of Doctor's Pipes have begun using the craggy, previously perhaps unwanted, wild nodes of bamboo in their work. Jerry Zenn is also a talented artisan who embraces this adaptation, with this Rhodesian being a handsome example. Featuring a pronounced, wrapping ridgeline set low on the forward-canting, broad-rimmed bowl, this piece is dressed in a warm, rustic sandblast. The rather eccentric-looking, asymmetric ferrule of bamboo lends a heavy dose of organicism to this composition, in addition to plenty of textural allure. A trim, similarly hued accent ring is atop the alternative material, which is followed by a fetching, green saddle stem of vulcanite adorned with an expansion ring, continuing the upward and curvy trajectory of the curling bamboo. A wildly imaginative piece from the Taiwanese carver, it's sure to enliven one's collection. 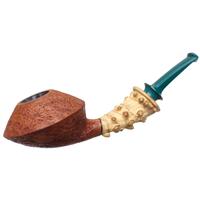 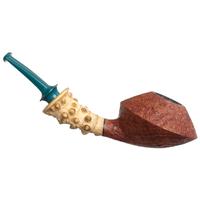 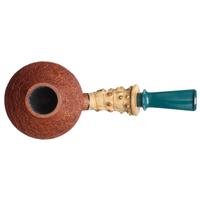 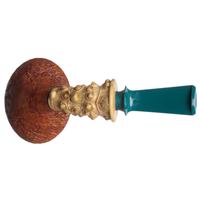 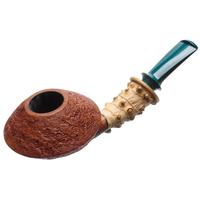