Many carvers' shaping styles lean more heavily toward either classic designs or more organic forms, their portfolios usually split between those two aesthetics and most often in favor of traditional pipe shapes. John He, though, is one of those carvers whose portfolio is dominated by organicism over classicism, and his work draws inspiration from elements of nature and prioritizes asymmetry — common themes within Japanese pipe design and, in particular, within the work of Tokutomi, under whom John studied for a time in Japan. While asymmetry within many other pipemakers' work would often be considered an outlier or more rare occurrence, the opposite is true of He's portfolio — even his more "classic" designs are often imbued with asymmetry as John reads the briar's natural grain to inform his shaping. Briar is rarely oriented symmetrically, so neither are many of John's pipes.

This Acorn is an excellent example of He's approach, and it's a common rendition from the Chinese carver. The elongated shank and its pinched orientation are characteristic of Danish artisan pipemaking, especially for the Acorn shape, but this version from John adds to it a strong sense of asymmetry and organicism. The bowl seemingly inflates from out of the transition into a strong forward cant, and when viewed from the smoker's perspective, it's evident how the left flank rises higher than the right — informed by the trajectory of the band of vertical grain encompassing the bowl. In line with this organic aesthetic, dimples of plateau adorn the rim, offering textural contrast against the smooth, chestnut stain and aligning tastefully with the slightly undulating stem base. Svelte of line and delightfully lightweight, this is a signature Acorn rendition from He and an excellent example of his use of balanced, intentional asymmetry. 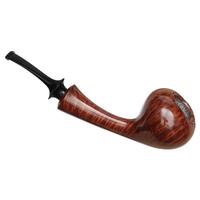 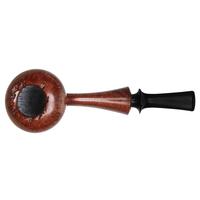 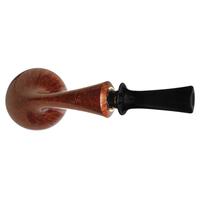 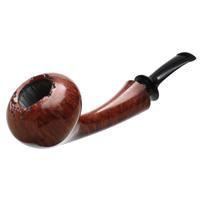 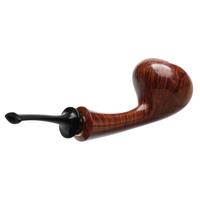 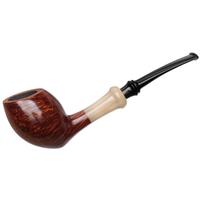 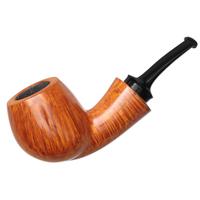 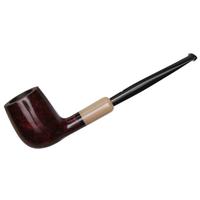