Old Dominion pipes began with a nearly extinct heirloom Indian corn which brothers Bob and Bill Savage, and Laurel, the latter's wife, found to produce a particularly sweet, unique cornmeal. Bringing this breed back from the brink, and finding a healthy demand for it from amateur cooks and professional chefs alike, they also soon found themselves with a lot of large, colorful cobs piling up as well. Turning up archeological evidence that their Pungo Creek Mills farmland had been the site of a clay and cob pipe making operation dating back to the colonial period, an answer as to what to do with all these distinctive corn cobs presented itself.

That answer, of course, was to hand-craft them into cob pipes fitted with bamboo cane stems — pipes just like those the planters who'd come before them had enjoyed over two centuries ago.

The Shenandoah model is a medium-sized cob by Old Dominion, featuring a a plump bowl with stout insulating walls and a stable sitting capacity. It also sports one of the warmer styles of finishes from the maker as well, a sort of honey-blonde that really suits the cob's natural texture. 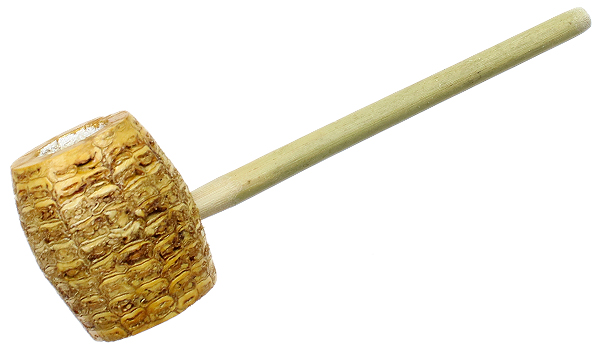 Customer Reviews (2 Total)
Write A Review
Write a review
Overall Rating:
4.00 out of 5 stars
颜值在线，符合审美
By: Shuai L.
Product: Old Dominion Shenandoah
小巧玲珑，轻盈易叼，抽吸感受很好，甘甜。柄内清理靠猛吹，通条使不上劲。上架量少，今年又购置两把。
Almost too small
By: Benjamin H.
Product: Old Dominion Shenandoah
This one has a bowl so tiny I'm certain it'd be a solid alternative to cigarettes for short breaks, if you desired. I'll certainly be ordering another, and more Old Dominion pipes when they become available. I found the bowl to actually be a bit too ... Read More small at first, but once you get how to pack it and it wears in, it'll be sure to last you some seasons Read Less