Featuring a robust shank and bulbous bowl, Rattray's "3" shape is a hearty take on the straight Apple. The stout proportions of the shank do well to match the bowl's broad, low-set waistline — meaning there's plenty of insulation around the chamber and room to accommodate a 9mm filter in the tenon and mortise. While the "3" is not as lengthy as the Scottish marque's "30" Apple, hewing closer to their "108," this design offers a more substantial presence in hand and a deeper tobacco chamber. 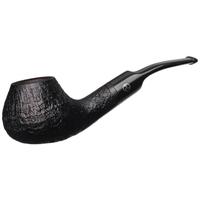