One of the beauties of the Blowfish pipe shape is how diversely it's able to be interpreted by different carvers. While the shape is most notably characterized by a central panel through the bowl's fore and wrapping over the rim, defining the flanks and prompting "fin-like" ridges about the transition, the angles, curvature, and positioning of these elements can vary dramatically from piece to piece. Chinese carver Sam Cui offers one of his interpretations here. The talented artisan has fashioned a number of Blowfish iterations, and they often showcase his penchant for compact shaping — to which this piece testifies.

Most notable in this iteration is Cui's positioning of the defining central panel, its orientation favoring the left side of the bowl and dividing the rim in half as the ridgeline sweeps over top the bowl and down to the right side of the transition. Such placement creates a disparity between the flanks: Both are plumply rounded, but the left is obviously smaller than the right, delineated by a slightly teardrop-shaped ridge pattern. Per the central panel's termination to the right of the transition, a single "fin" flicks outward to accentuate the piece's inherent dynamism and organic appeal. Though the ridge doesn't continue into the bowl, it creates an implied line that mirrors the left flank's defining ridgeline. Subtly paneled, the shank and saddle portion of the stem echoe these rigid design cues, while flaring toward the mouthpiece. It's all dressed in one of Sam's oft-seen, auburn contrast stains, highlighting the shape's immaculate grain orientation. The pattern conforms beautifully to the Blowfish design's conventional arrangement — cross grain along the central panel and birdseye studding each flank. 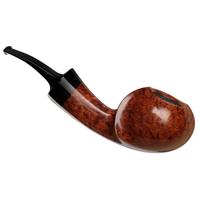 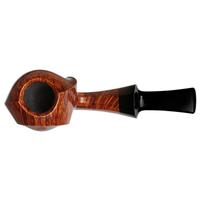 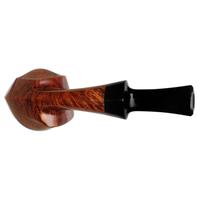 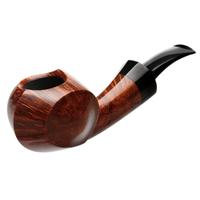