A large, sculptural Volcano rendition from Scott Thile, this pipe is more than a smoking instrument; it's a proud herald of the virtues and nuances of artisan pipe making. Scott is a talented musician and piano tuner, and the father of Chris Thile, who is widely recognized as one of the best mandolin players in the world. An autodidactic learner and woodworker, Scott taught himself how to make pipes by studying American artisans including Todd Johnson and Adam Davidson, and progressed very quickly in his craft. He hand-makes artisan pipes in what he describes as a Danish neoclassic style as interpreted by North American greats.

This is Thile's personal take on the Volcano design, one well represented across his portfolio but with each bearing their own individual nuances. This exciting exemplar stretches to nearly six inches in length and is compressed horizontally, giving it a streamlined appearance from above that is rife with implied momentum. A crisp ridgeline demarcates the entire underside, wrapping up and over the stem to join in a wave at the top and incorporate the stem into the composition. From that ridgeline, the bowl tapers steeply to a chamfered crater at the forward-canted rim. Tight, uniform striations of flame grain rise in concert with the bowl's shaping, joined by handsome tendrils on both flanks of the shank, while the entire curvaceous underside is packed with mesmerizing birdseye. A light contrast stain and smooth finish put the grain on full display, and one of Scott's hand cut vulcanite stems melds seamlessly with the artistic composition to complete a delightfully organic aesthetic. 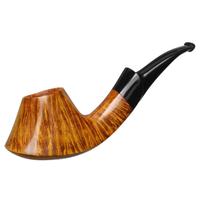 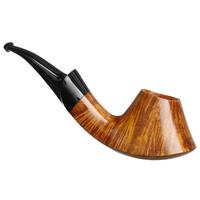 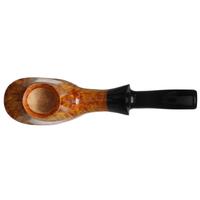 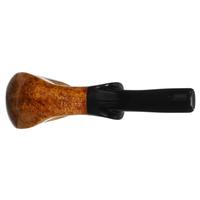 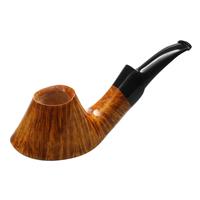 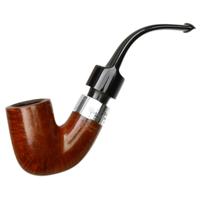 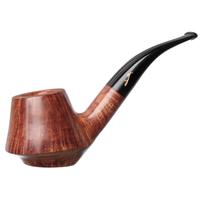 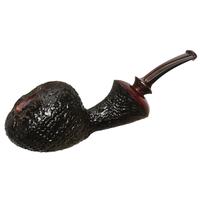