With a background in music and piano tuning, Scott Thile's transition into pipe making is somewhat unexpected, though his background may suggest otherwise, as he has been a lover of pipes and pipe tobacco since he was 16. In addition, Scott is an accomplished woodworker, rebuilding pianos as well as tuning them, with this experience contributing to his success as an autodidact, as he has gleaned much of his information on pipe making from the internet, gaining skill with each piece he crafts and furthering his talent. His deeply artistic approach to pipe making stems from his love of music, with each pipe being treated as if it were a piece of music, making the word composition all the more appropriate here and reflected in his grading, with this bent Bulldog receiving the Opus 2 ("OP2") grade.

The bent Bulldog is a kind of inherently muscular shape, with a good degree of structure throughout its build and a thickness possessing the curves that are imbued in it. This pipe is an example of the balance that can be achieved between muscularity and curves, with, yes, a thick build, but also a lithe sense of line and easy ebbing of form that keeps the eye fastened to it firmly. It's difficult to achieve this in a Bulldog, as one must take into account the ridges that line the shank, but Thile seems to have mastered this flowing kind of ridgeline, as all four of them framing the shank seem to meander from button to transition, rather than racing there. Of course, this is aided by the soft bend of the shank and stem, with the shank rising upward just a touch and the stem mirroring this, downturning softly to the button. The transition is deeply cheeked, with the ridges hitting it dissipating nearly instantly, creating a degree of separation between the shank and stem and the bowl and allowing for the bowl to be more structured and upright, with the fore and aft sections maintaining a nearly identical travel to the rim. Underneath we see a consistent undercurve and a lifted heel, pushing the bowl into further prominence and magnifying the easy flow of the profile, with the heel sweeping up uninterrupted into the bowl. Said bowl showcases dual beadlines beneath a wrapping ridge which marks the taper to the rim, with this taper being extremely softly rounded before it drops into the chamber.

The briar here has received a rich contrast stain, with a bright mahogany base that allows dense striations of auburn flame grain to pop out around the bowl in striking visual relief. This coloration is wonderfully paired to a cumberland stem, with its hues complementing the stummel and giving the entire pipe an alluring harmony. Crowning the rim is a field of swirling birdseye, with a long stretch of it present on the underside, with pinpricks of it peeking through on the top of the shank as well. 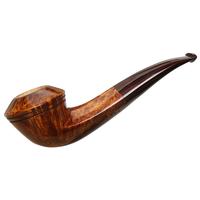 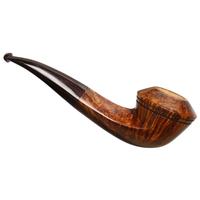 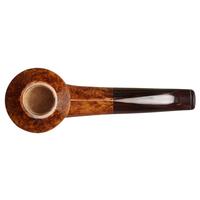 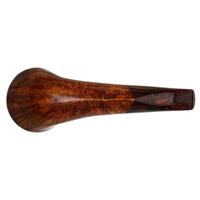 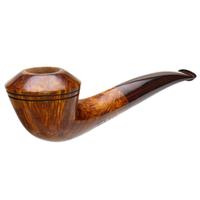 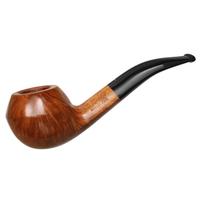 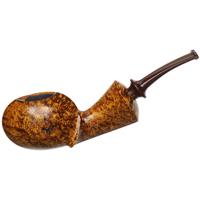