Given his background as a musician and piano tuner, Scott Thile's progression into pipe making comes somewhat unexpectedly, though his love of pipes and tobacco stretches back to his youth, buying his first at 16. As a piano tuner, Thile is well-versed in the use of tools and in woodworking, and his passion for music has resulted in an approach to pipe making that's much like crafting a piece of music, taking care to ensure that each piece of briar is able to express itself as fully as possible. Though much of his training has been entirely autodidactic, Thile spent time with both Todd Johnson and Bruce Weaver, enhancing his skills and evolving his shaping style which he defines as: "The Danish neoclassics as interpreted by the North American greats."

The profile of this Volcano is one that we've seen before from Thile, though by no means are any of these mere copies of each other: No, each iteration of the silhouette has been altered and tweaked in sometimes minuscule ways to ensure that each not only looks different, but feels different. Comparatively, this rendition showcases a more upright build that further emphasizes the bowl, with a sweeping curvature toward the aft wall that's countered by a slightly more proud, angular fore. Said fore sees the rim on that side rise higher than the aft, lending it a gentle rearward slope which imbues the piece with a kind of upward momentum that ensures a dynamic look overall. The entirety of the underside has been rounded by a firm ridgeline, with briar pushing out from the base below the chamber, lending this pipe a touch of softness that serves to subtly contrast the firmness of the ridge above it. The shank and stem here take on a sweeping arc that sees the shank lifting demurely throughout, flaring slightly to a stylized half saddle stem that furthers this flare to the end of its base, one that continues the wrapping ridge's travel in an arc that wraps over the top and plunges into the same ridge on the other side: the half-saddle configuration allowing the clean lines underneath to progress in a sweeping undercurve. Dressed in a vibrant honey-hued contrast stain, the stummel is surrounded by flame grain on both flanks, the dense striations wrapping around the bowl while birdseye populates the underside and peppers the deep internal slope of the chamfered rim. 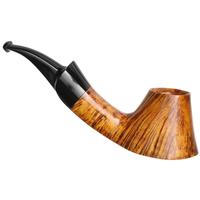 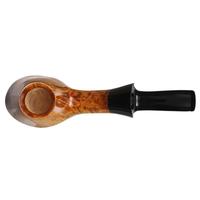 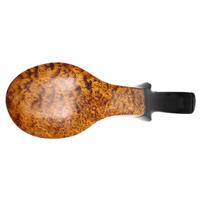 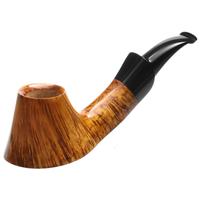