The Tsuge Ikebana workshop is comprised of three artisan carvers who fashion their own individual pieces but do so under the Ikebana name. After graduating from one of Japan's most elite art universities, Asami Kikuchi joined the Tsuge Ikebana workshop and began carving elegant pieces of smokable art. Kikuchi's style often reflects an appreciation for muscular yet graceful forms, imbuing them with a strong degree of organicism that is reflected in this bent Apple offering. It's a testament to Asami's skilled craftsmanship and keen eye for shaping, as her near life-long fascination with the possible tactile sensations and visual delights inherent in small wooden objects certainly served her well with this piece.

Perhaps the strongest organic element at play on this example is the bamboo shank extension with two trim knuckles positioned between the plump bowl and the ever-so-slightly downturned saddle stem. The bamboo's slender disposition helps accentuate the bowl's supple, inviting curves while its pale hue contrasts against the rest of the piece's primarily dark color palette. I'm particularly stuck by how precise the rhythmic spacing of the bamboo is, a small yet crucial detail that allows for a seamless, uninterrupted profile. The bowl is the largest element within this composition and there's plenty to admire about its execution. It tapers beautifully and minimally from its bulging flanks up toward the rim and feels remarkably natural in hand. The light-depth sandblast maintains the bowl's gentle lines and curvaceous character, while unveiling a fascinating display of ring grain creeping up the bowl before meeting the smooth rim. A stellar piece from Kikuchi that displays her penchant for organic designs and showcases the precise craftsmanship she has spent years cultivating. 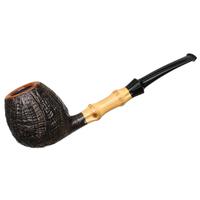 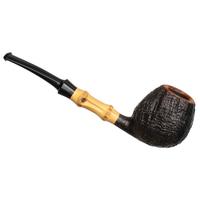 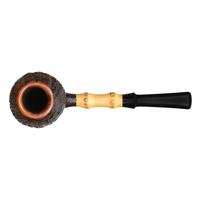 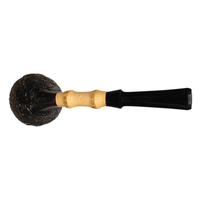 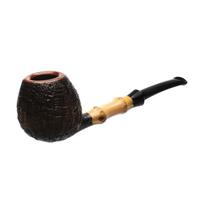 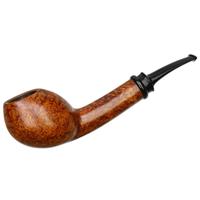 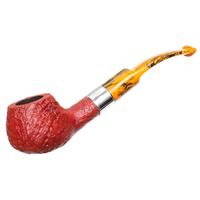